When we last left off, Elijah has given Aniyah a key to his apartment in the city at the last club meeting. He’d done other things since then, like convince his hospital to let him stream certain checkups with his streaming drone, but his brain was stuck on Aniyah.

He spent the days after fretting about whether she’d actually show up, and if she did, what random Sim she’d find in his apartment. He knew he should be thinking about his girlfriend Alice (he kept forgetting he actually had a girlfriend), and only worried about being friends with Aniyah. But he couldn’t help his feeling of relief when Aniyah showed up unannounced and the only other person there was his neighbor Jason.

“So this is where the magic happens, eh?” asked Aniyah with a smile.

“Heh,” said Elijah with a nervous smile. “What magic? What have you heard?” 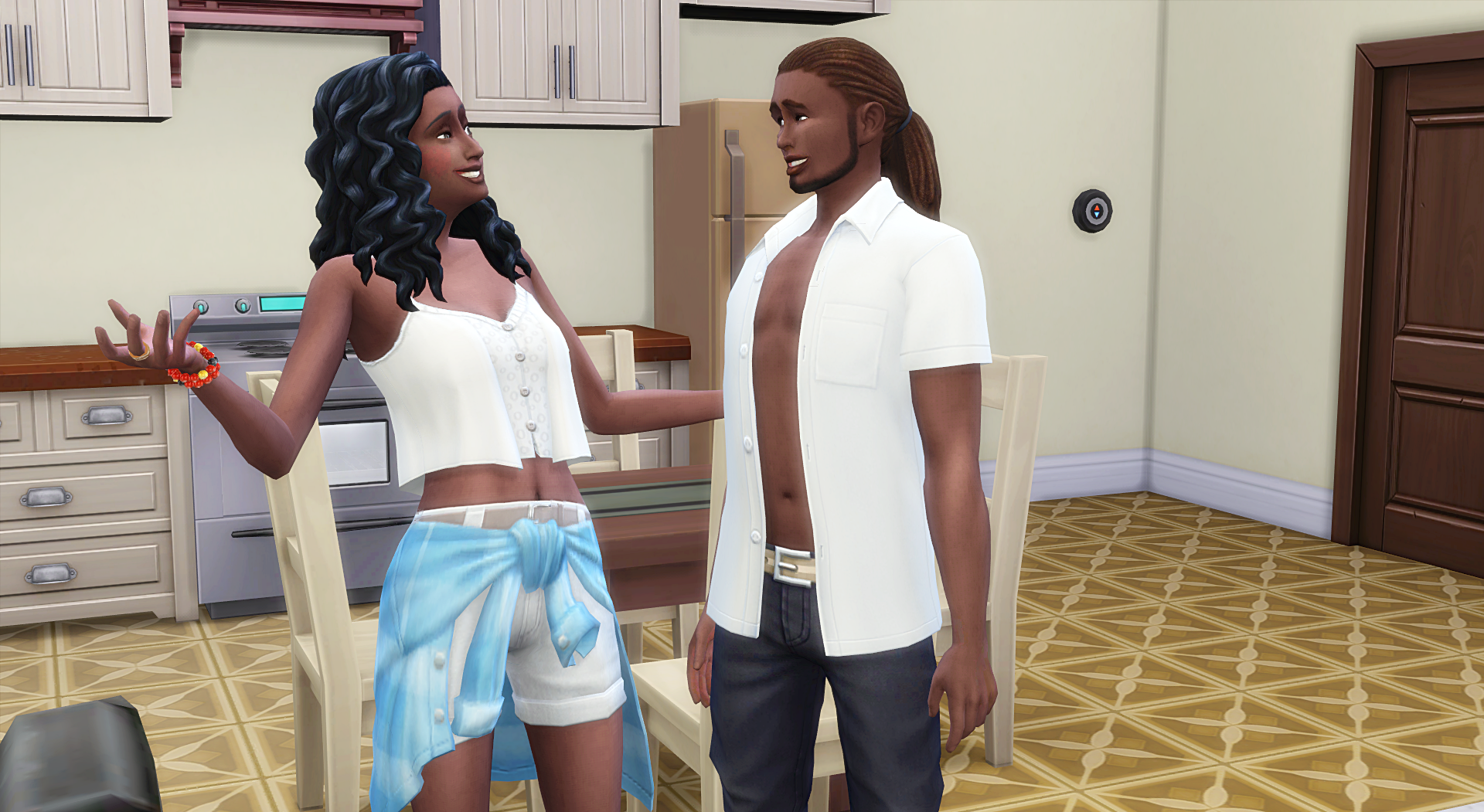 “Oh come on, we all know you’re a man about town,” said Aniyah with a laugh. “Calm down, I’m just cracking a joke. We can talk about something else, like how your building is about to turn into a co-op.”

“Oh, now that I want to talk about,” said Elijah in relief. “Let’s sit at the table and talk. Don’t mind Jason, he’s just here, addicted to BlicBlock and running up my electricity bill.” 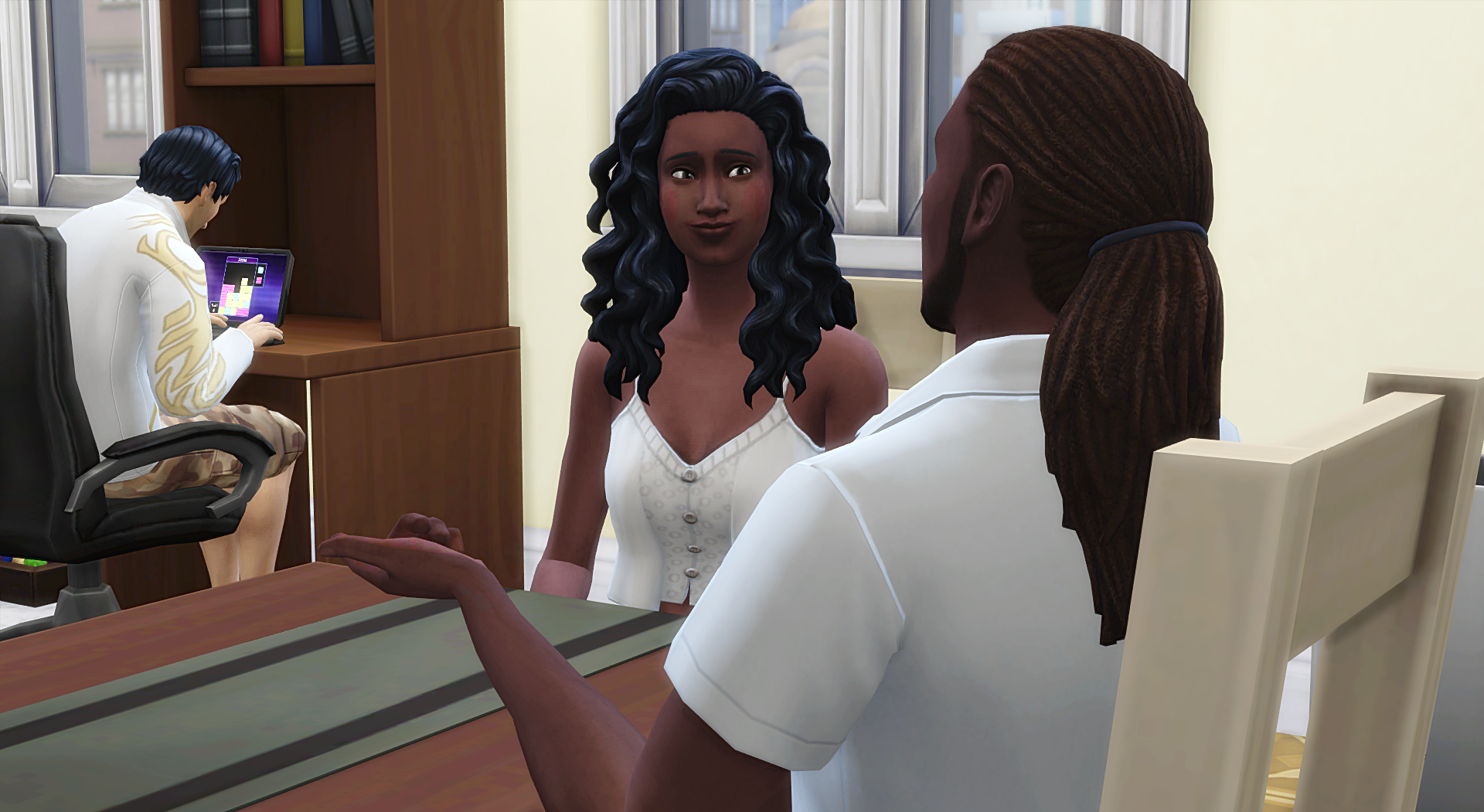 Elijah explained to Aniyah in more detail how his building was converting from tenant-rented apartments to a co-op. He was intending on buying the apartment he currently lived in, but as far as he could tell, none of his neighbors wanted to buy their apartments.

“Well that’s hard to believe,” said Aniyah. “This big beautiful brownstone, who wouldn’t want to live in it? I would bet 1,000 Simoleons that Devan and I would jump at the chance to live here.”

“Heh, that would really be something,” said Elijah. “You living close by, stopping by whenever you wanted, we’d be such good friends.” 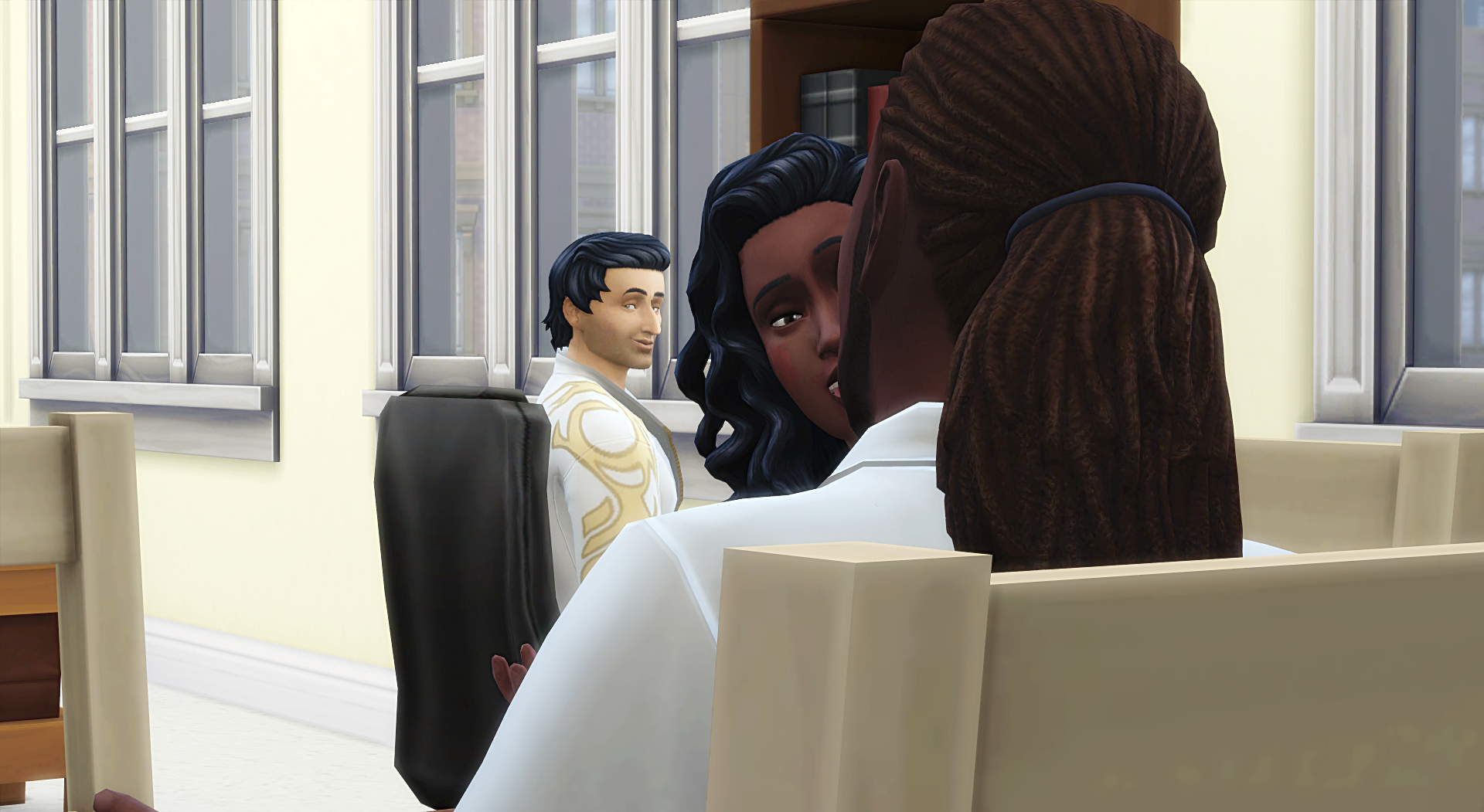 Jason looked up after the latest round of BlicBlock and realized there was another person there. Quite used to Elijah having company, he knew the drill, and was surprised he hadn’t sent him the [Get Out] hint sooner.

To cover the weirdness of Jason’s abrupt exit, Elijah offered food. “How about I whip us up some fish tacos?”

“Sounds wonderful,” said Aria. “As a chef, it’s nice to take a break and have someone else cook for me for once.” 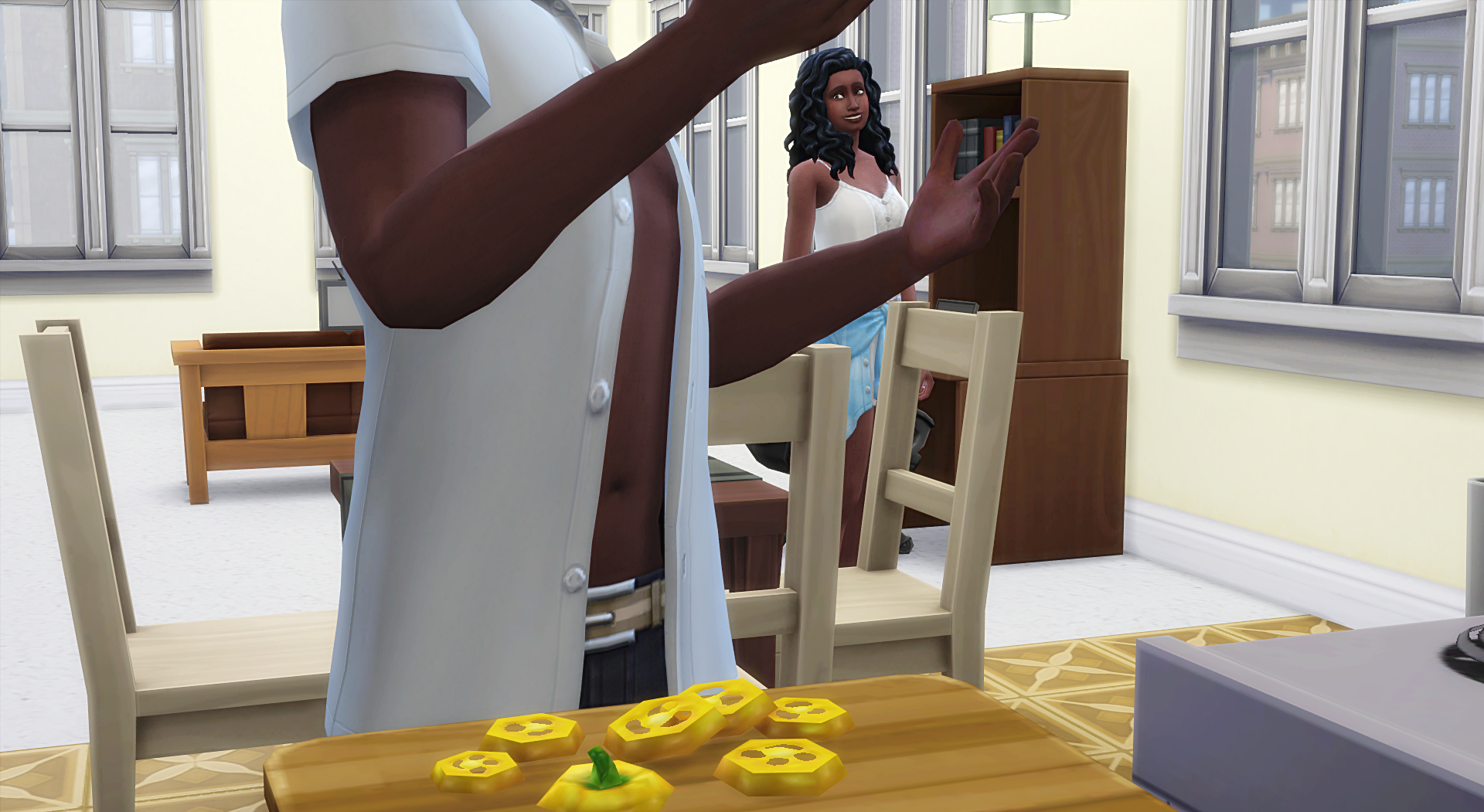 “So… what do you think?” Elijah was nervous that his food wouldn’t measure up to Aniyah’s standards.

“No, they’re actually pretty good,” said Aniyah. “Eight out of ten, would recommend.” 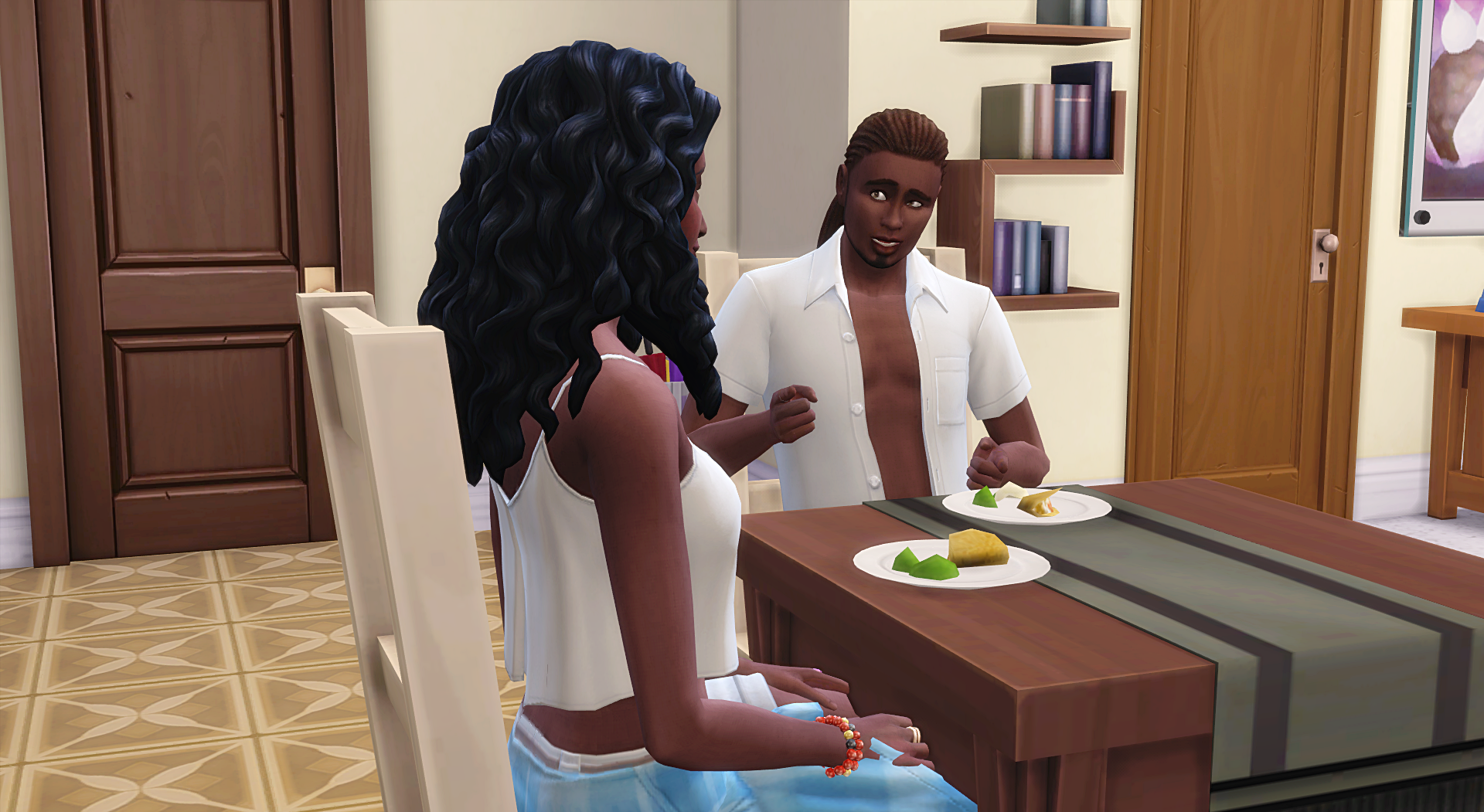 “Yes! I knew it, you smell that bit of cumin I added? That’s what really puts it over the top,” said Elijah, taking a deep inhale of his tasty dish.

“Alright, alright, calm down now,” said Aniyah. “I said they were good, I didn’t say they were outstanding.” She chuckled and continued eating her 8/10 tacos. 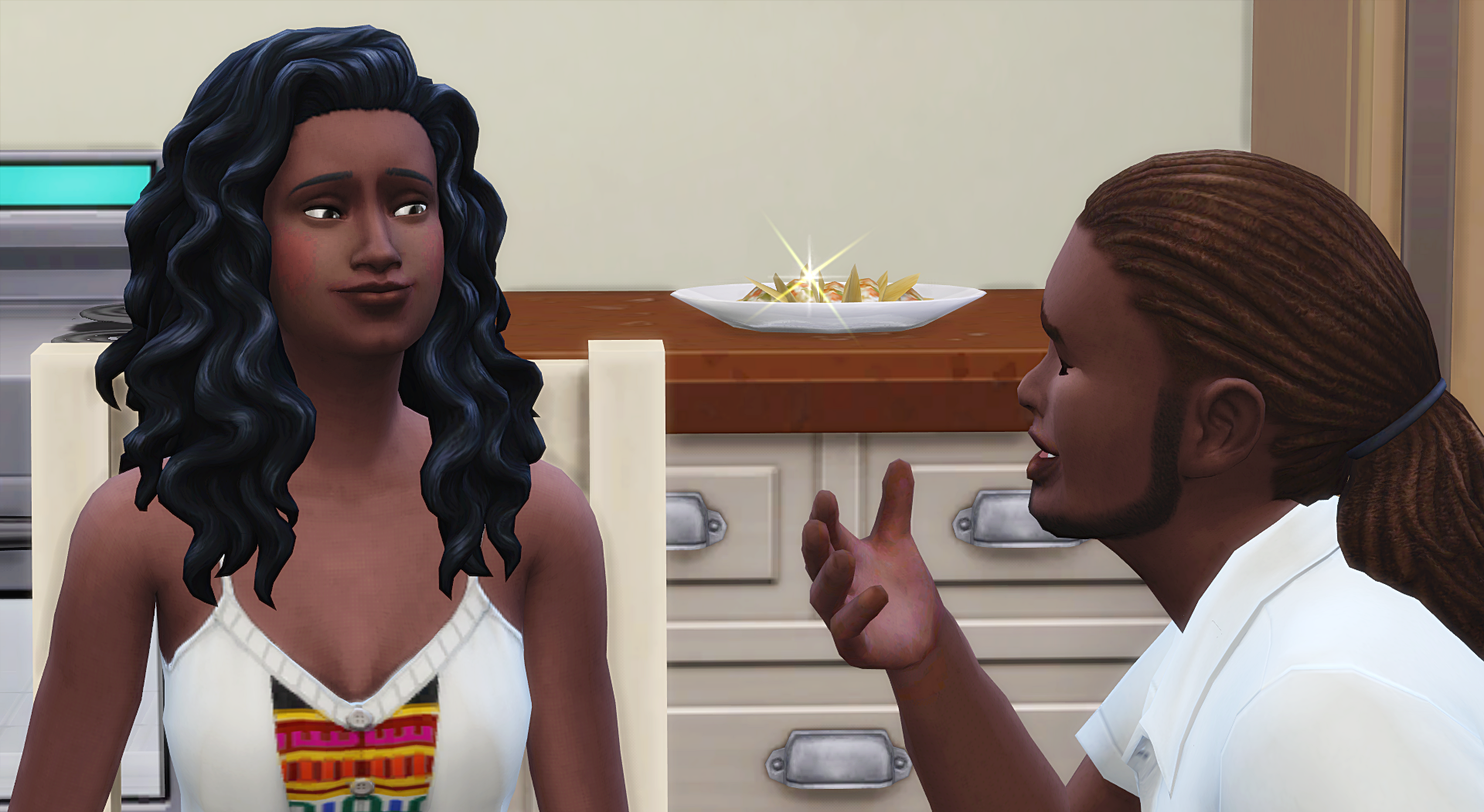 Aniyah didn’t get to finish her sentence because Elijah’s phone rang with a call from Devan. 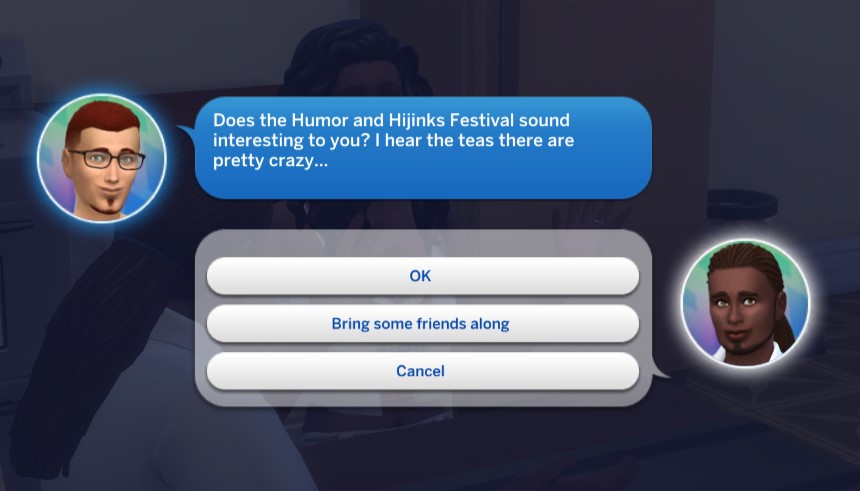 Elijah agreed to go because he was always down to hang out with the club members. They were still bonding and gelling as a group, so it was important to really spend time together doing a variety of activities. That’s what he explained to Aniyah as he cut their two person hang short and dragged her with him to meet the rest of the club at the Humor and Hijinks Festival.

Aniyah asked him to look at the group text before meeting up with everyone, and he said he would, but he didn’t want to keep their friends waiting. Besides, he reasoned, anything he missed from the group thread would likely be discussed at the Festival, so he would get all caught up.

Aniyah chuckled to herself, ready to enjoy Elijah’s reaction once he talked to the rest of their club.