He’d finally gotten approval, and Elijah felt on top of the world! Sim health information violations were no longer a problem. Elijah had managed to get approval from the board at his hospital–along with a few fame hungry patients–to start streaming certain moments at work. This extra fame would be great for his personal goals, and the obvious evidence of his skills and bedside manner would be great for his professional success.

As soon as he was allowed, Elijah had his drone out and recording. He thanked his first patient, Muriel, on camera for agreeing to help. She was very happy to help, “anything for Doctor Elijah ,” she said. 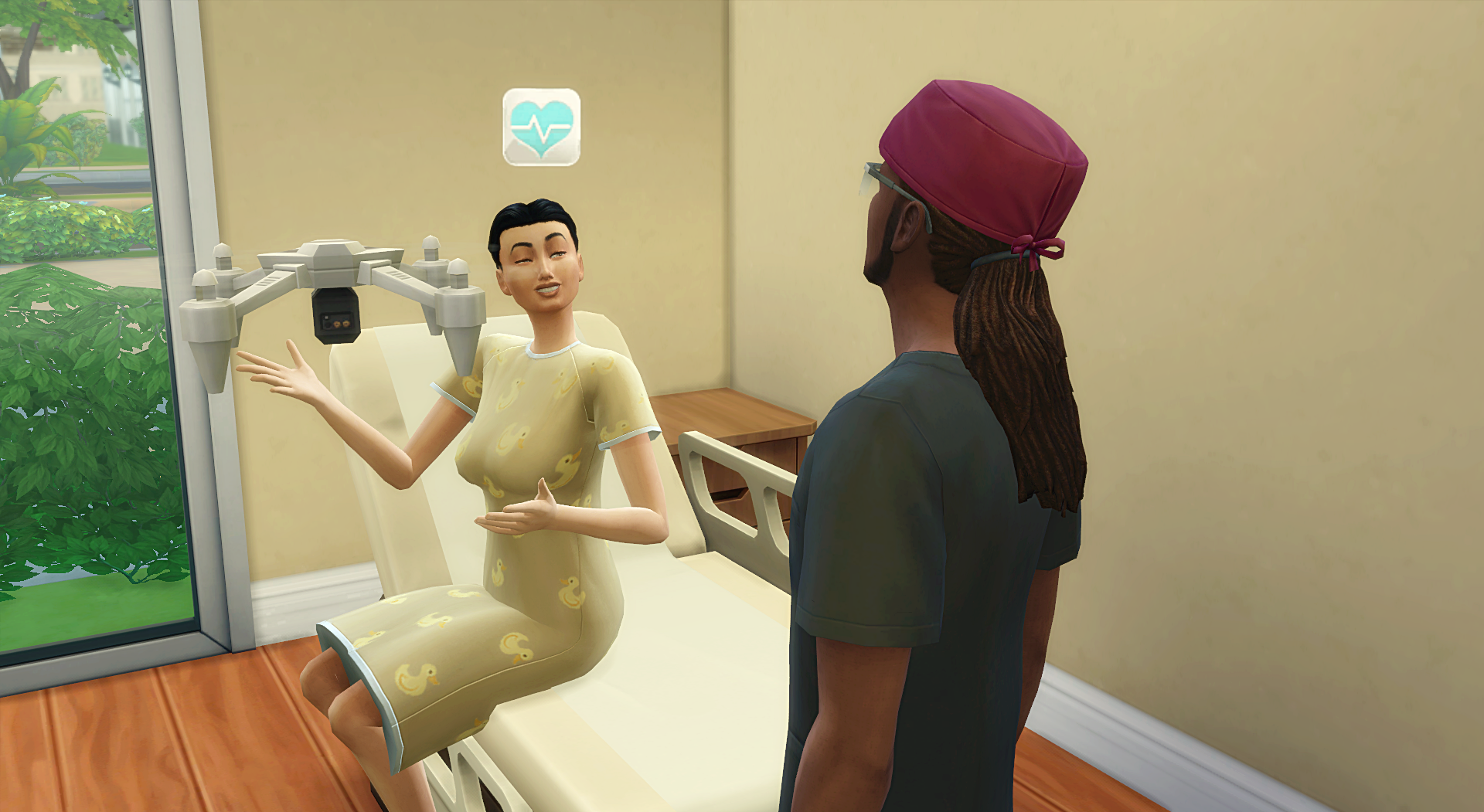 He continued with his examination of her. He went through all the steps, taking longer than he normally would with the consultation. Muriel didn’t seem to mind. She really enjoyed the extra attention and played it up for the livestream. Elijah was happy he’d chosen her to be his first live patient on his streaming channel. 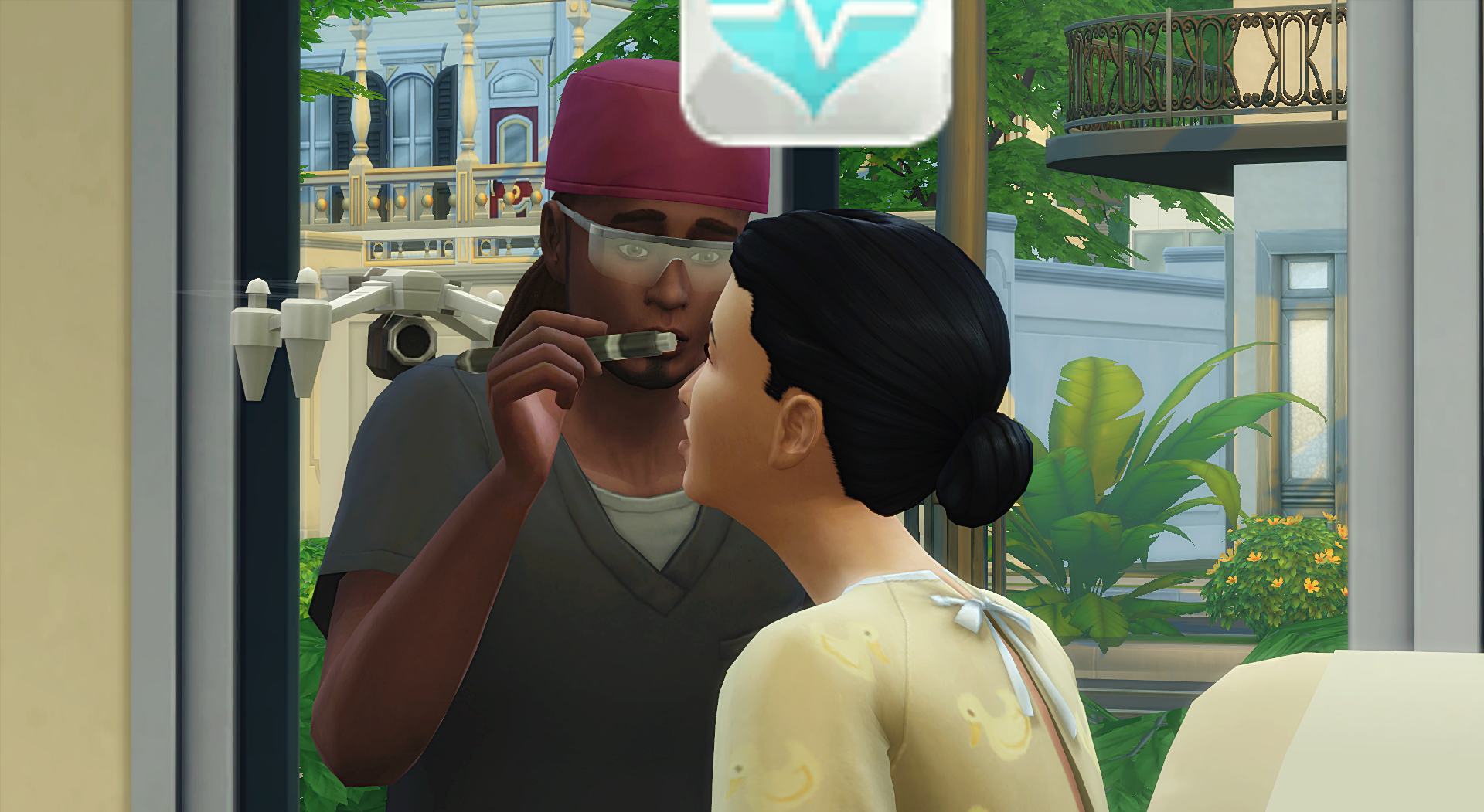 He was hoping it would be something more dramatic, but it was just plain old Llama Flu. He gave her the required shot and sent her on her way. The hospital agreed to only one patient stream per shift, but that was more than enough for Elijah to get the extra follows, likes, and whatnot.

He was already imagining a future where he’d conduct surgery live on camera, deliver babies with thousands of Sims watching live, the sky was the limit!

After work, he headed home, eager to see if Aniyah would take him up on his offer to stop by any time. Technically, he was seeing someone, as he had agreed to be boyfriend and girlfriend with Alice Martin. But there’s no way she thought they were exclusive. And she wasn’t the only woman who might just show up, so perhaps it was for the best that he continued to see Aniyah only for club sanctioned activities.

He decided to go for a walk around the neighborhood with Miss Kitty to clear his head. And if he happened to meet another attractive lady in that time, then he would take it as a sign to stop thinking about Aniyah so much. 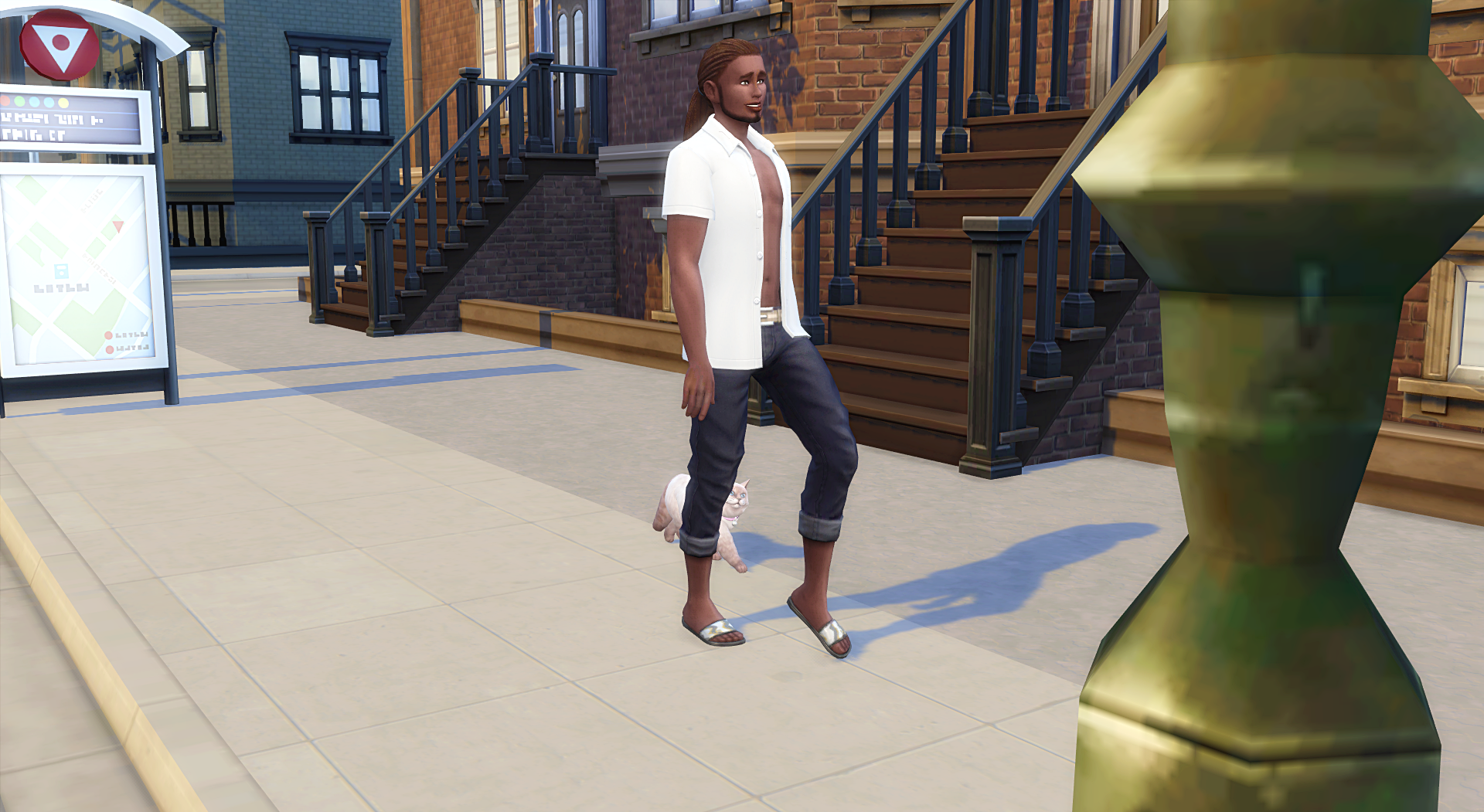 He didn’t meet anyone, so he just headed upstairs to have dinner and chill. His neighbor Jason stopped by to hang, and he didn’t seem at all phased that Elijah was basically cradling Miss Kitty in a hug for half of their conservation. 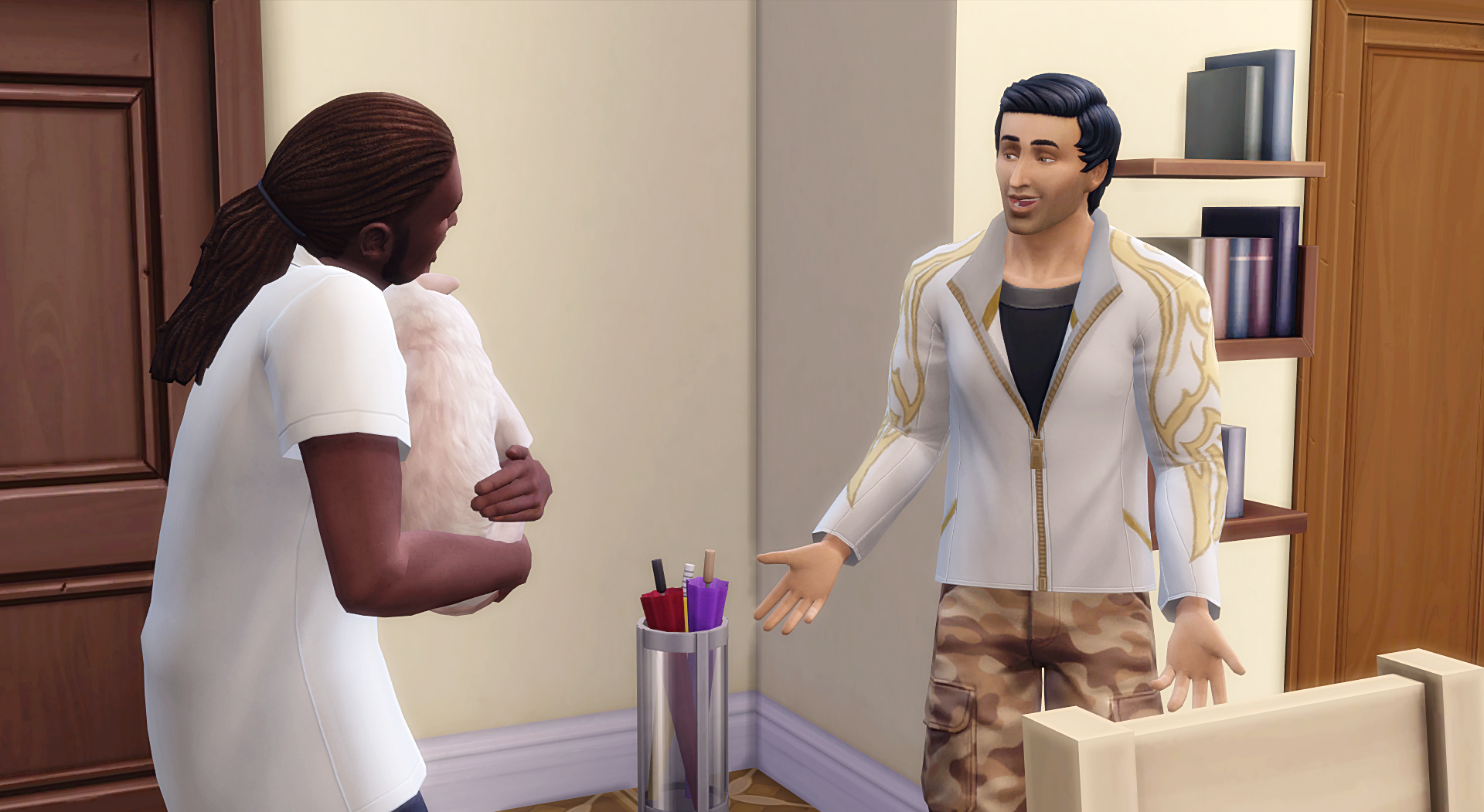 Just as Elijah was about to call it an evening, Aniyah showed up! 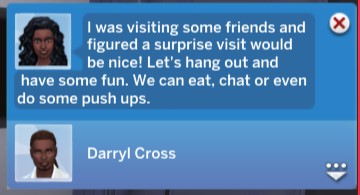 Elijah greeted her as soon as she came up on the elevator and gave her the biggest hug. 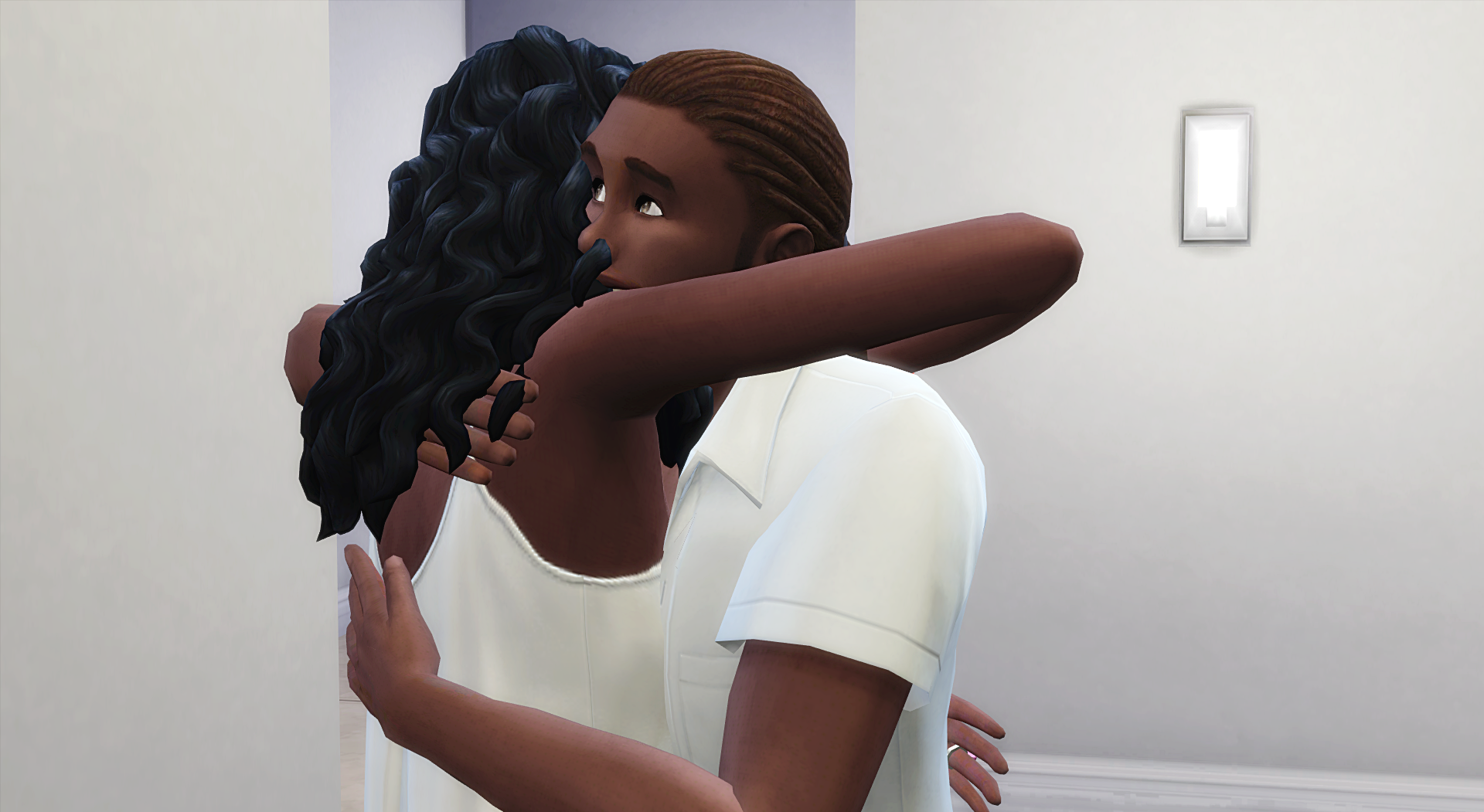 Goodness Aniyah gave the best hugs. And her hair always smelled like, what was that? Jasmine? Roses? He would have to figure it out. Well his night was about to get interesting. But not that interesting. Because they were friends. Just friends.