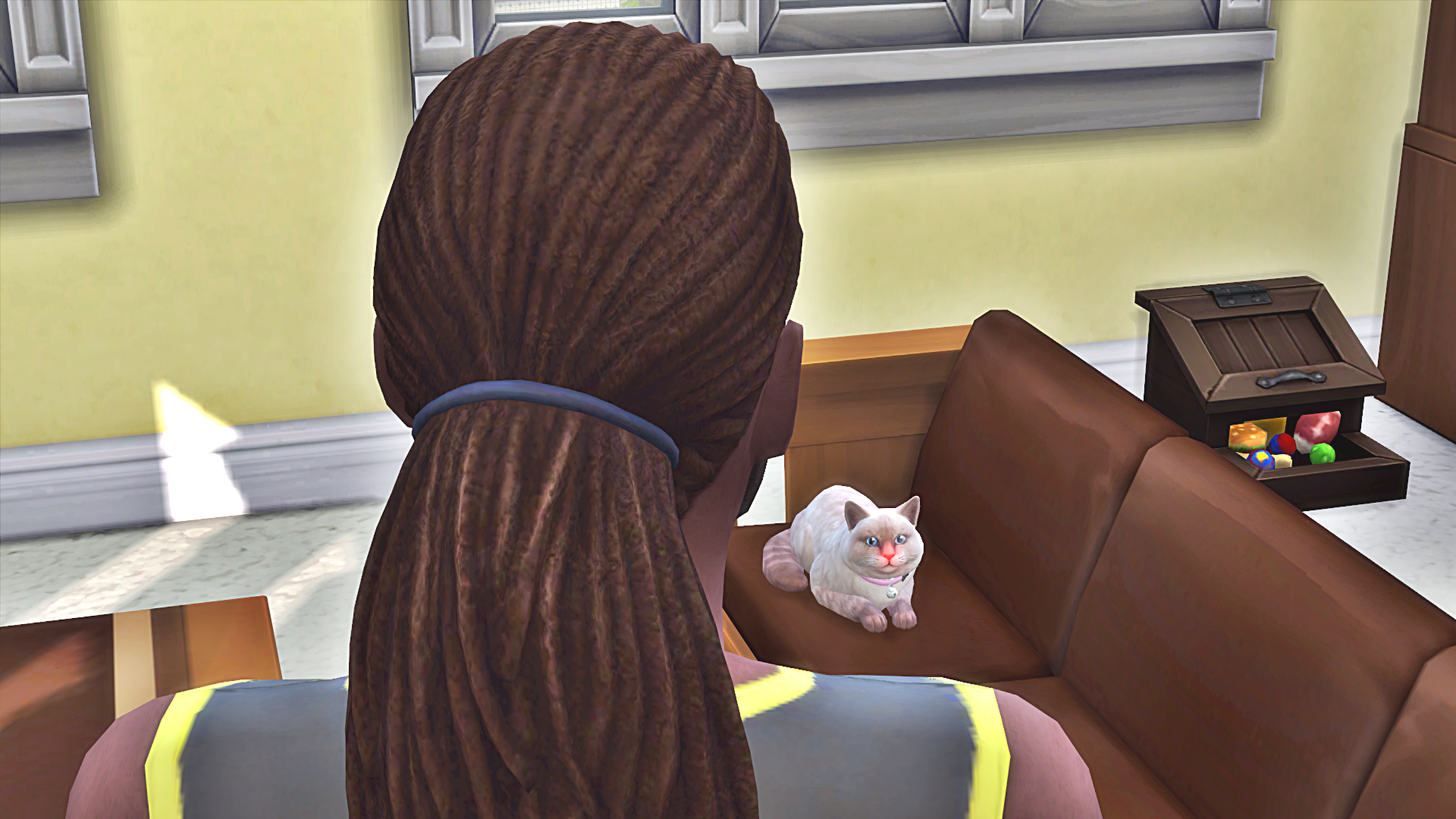 Elijah returned home from work in the hot summer afternoon to find Miss Kitty lit up like it was time to drive Santa’s sleigh. This just wouldn’t do. He scooped her up and headed to the Brindleton Pawspital. The one in Strangerville was closer, but things there tended to get… weird…

They arrived at the Pawspital, and Elijah wasted no time checking Miss Kitty in. 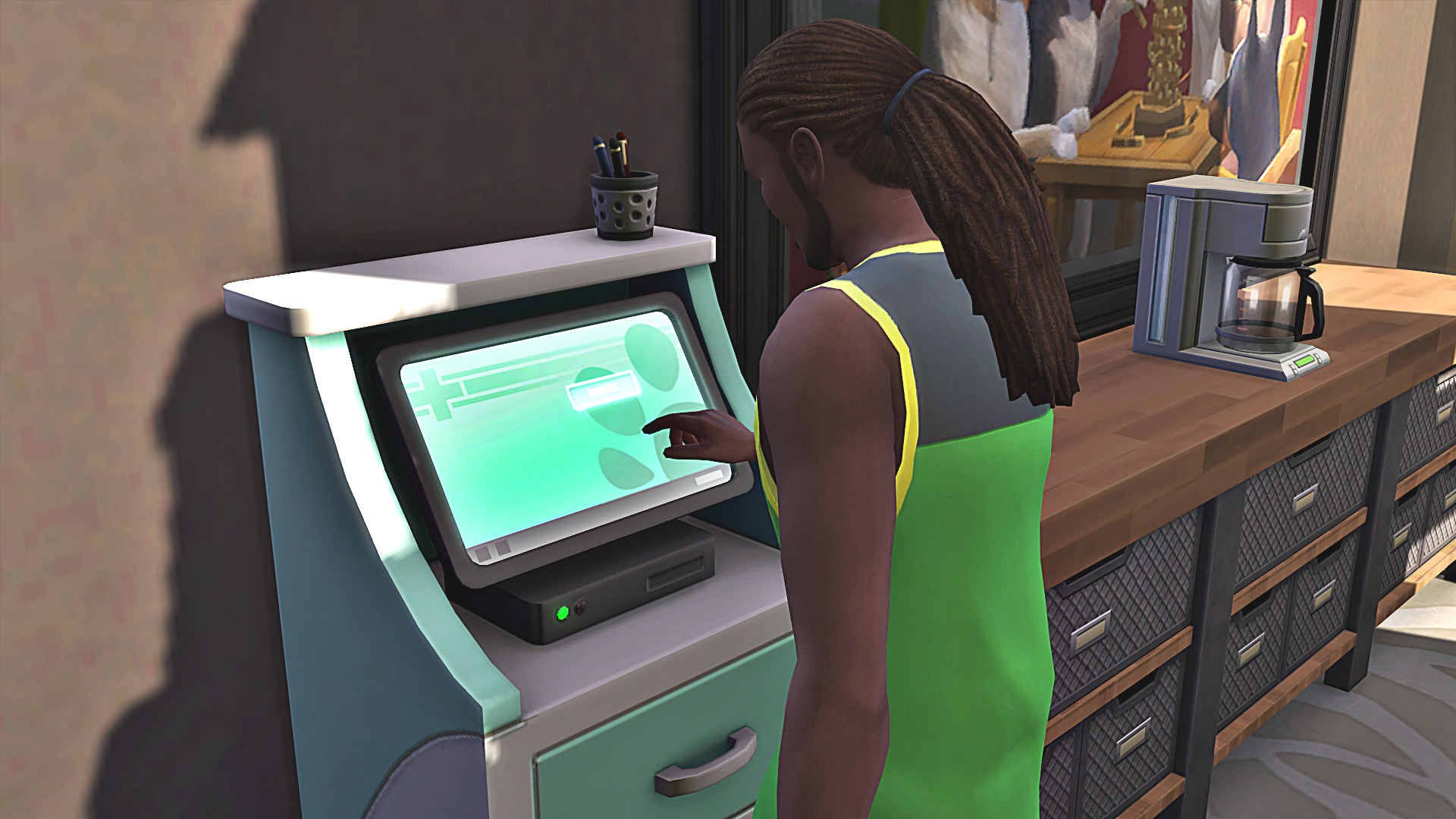 She wasn’t feeling well, but she looked better than some of the other pets at the clinic. 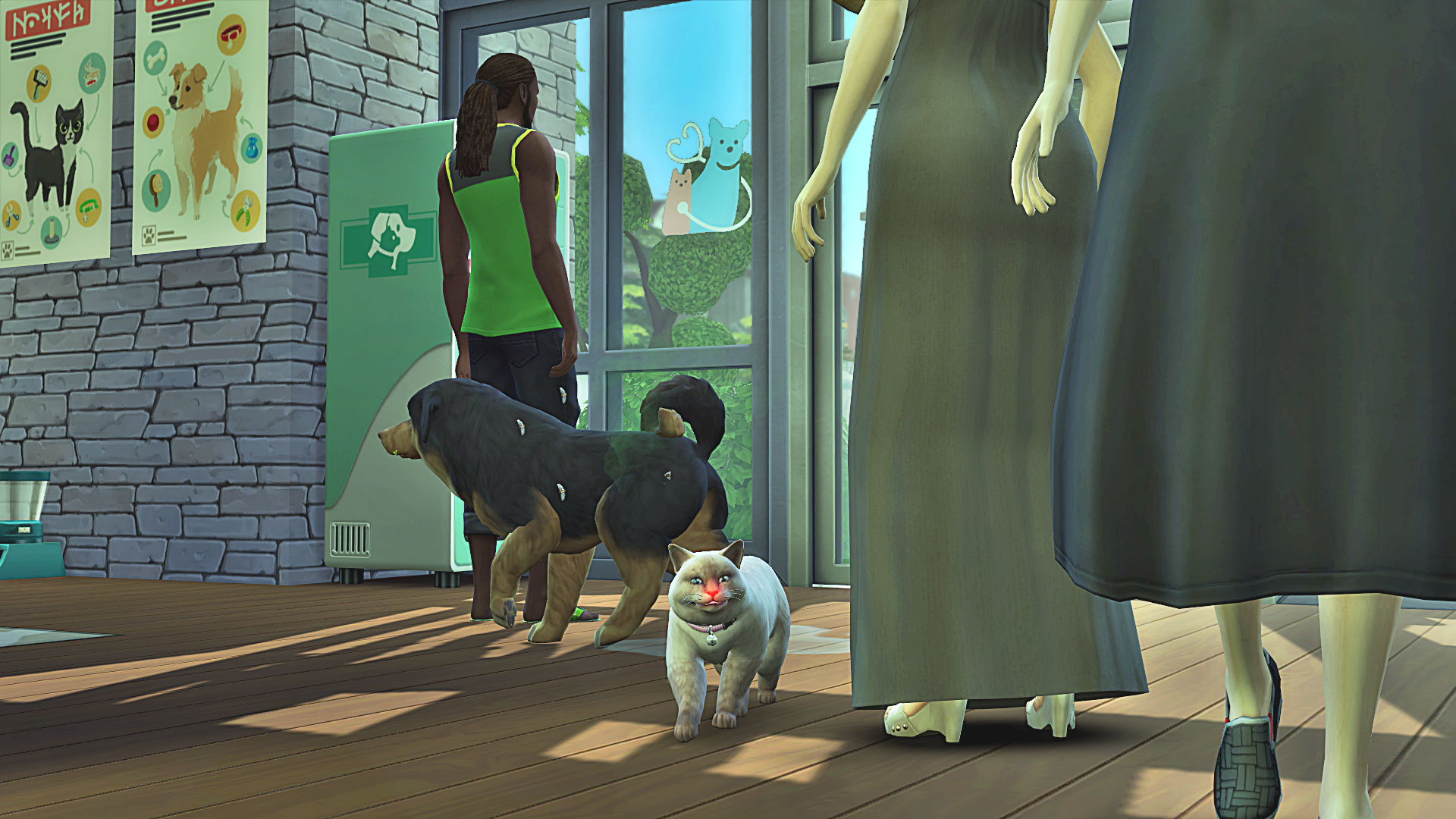 As Miss Kitty was being seen to by the vet, Elijah had an idea. 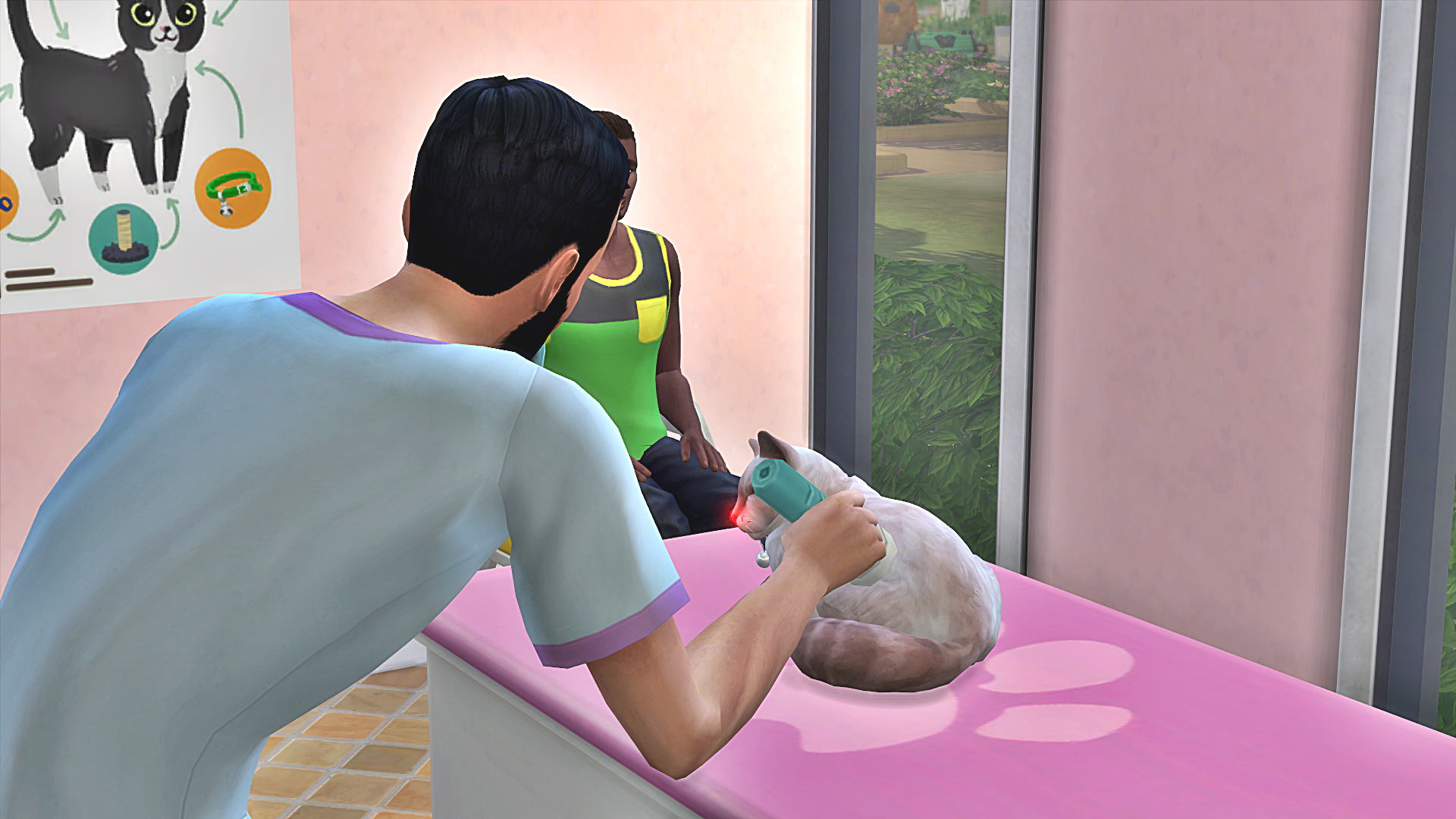 He couldn’t believe he hadn’t thought of it before. What better way to gain new fans than to livestream Miss Kitty? Nothing like a cat in a cone to gain the adoration and admiration of his followers. 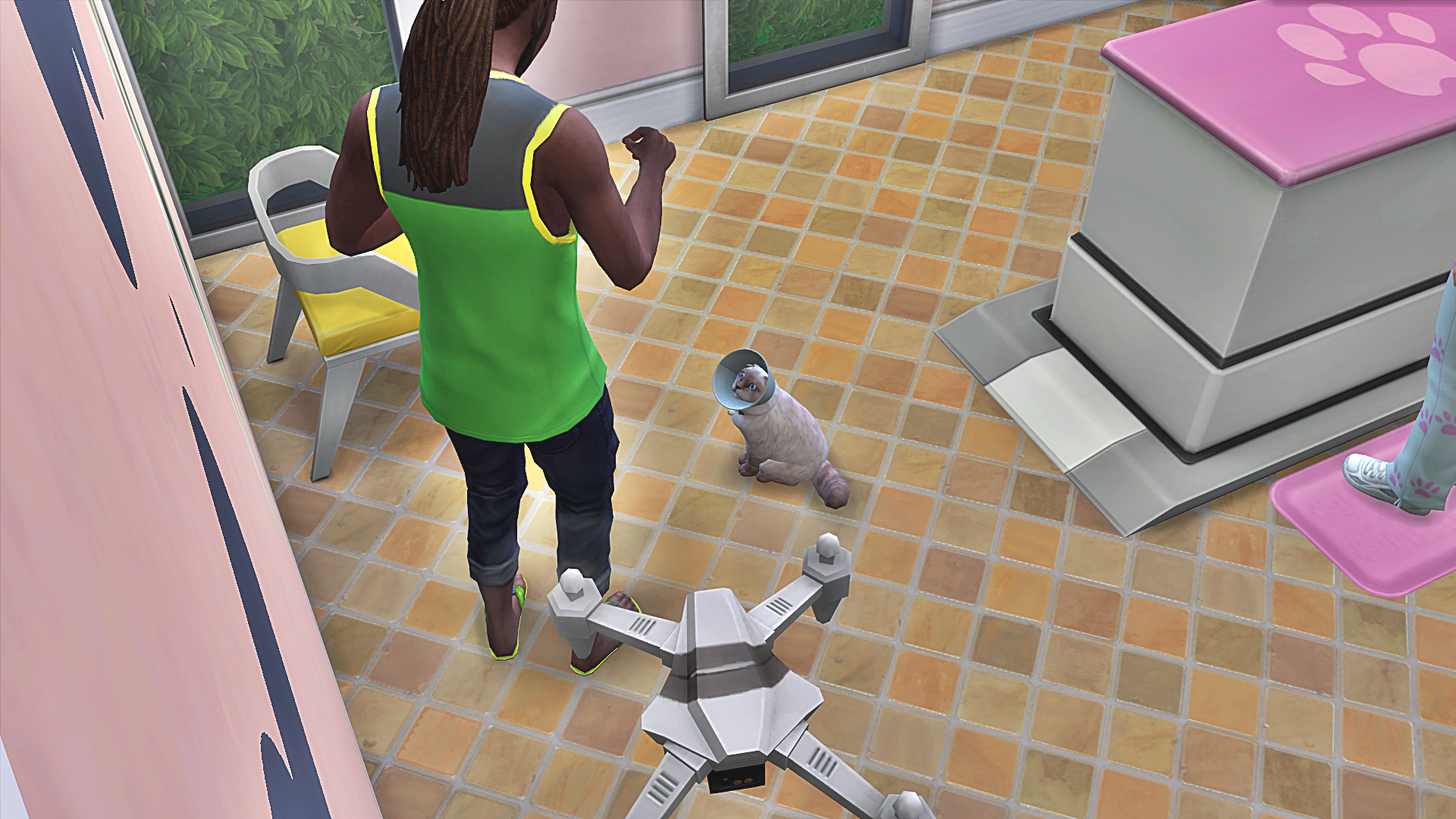 To stay “on brand,” Elijah headed outdoors to snap some photographs. He even took a few Simstagram shots of Miss Kitty. She wasn’t feeling well, but she was a trooper. It was a match made in a heaven. A man, a beautiful summer afternoon, an adorable cat, and a drone. 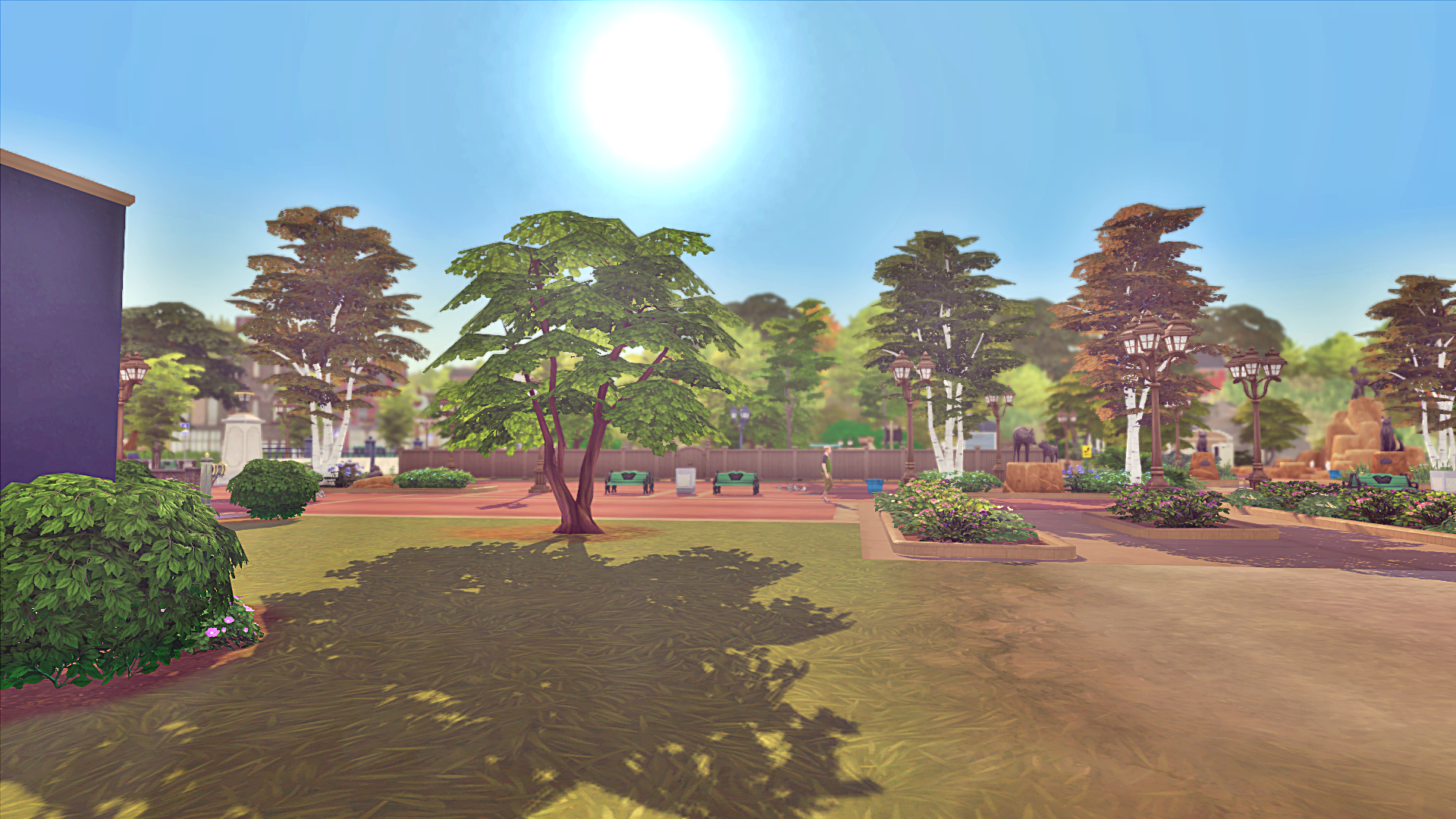 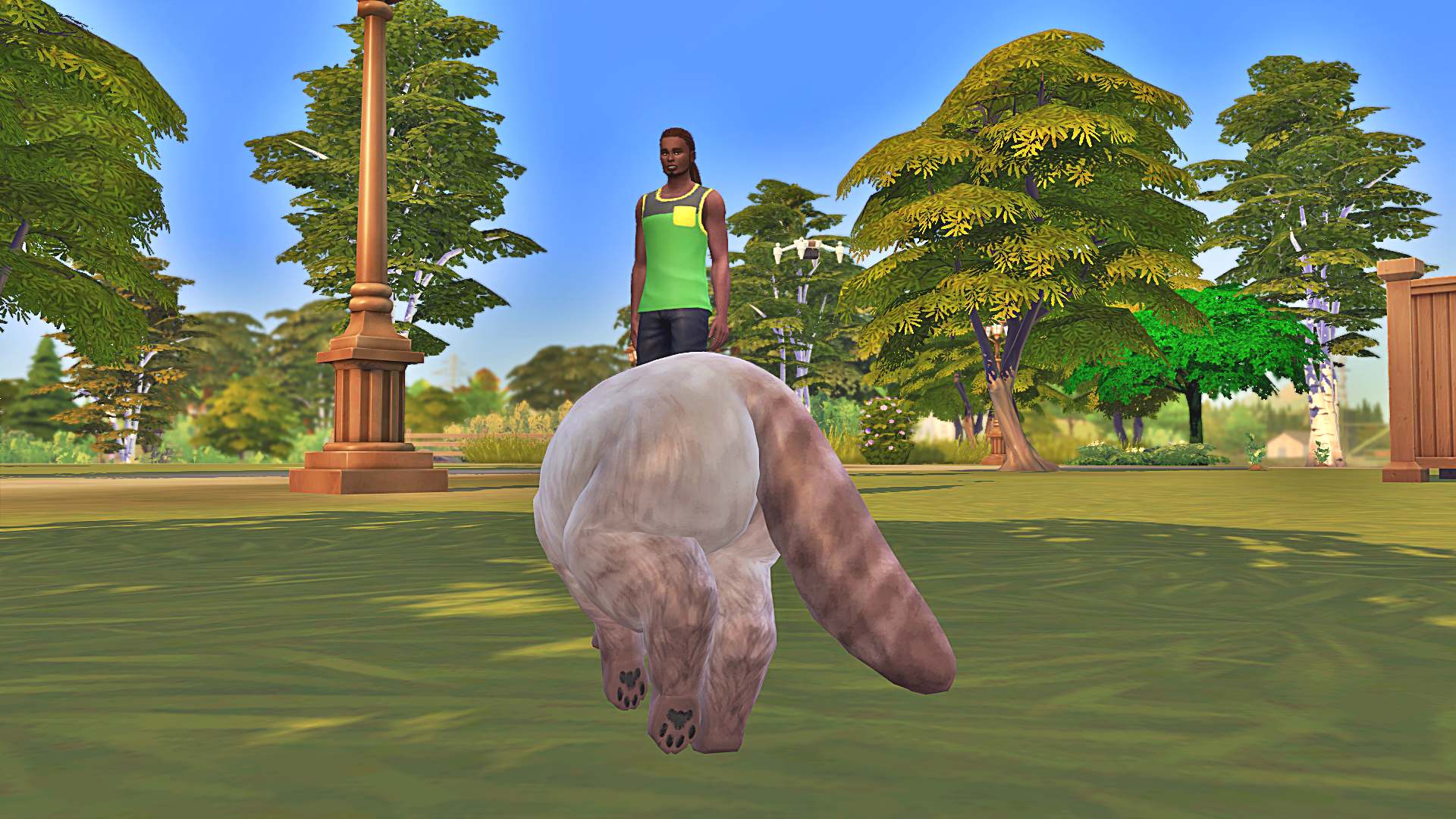 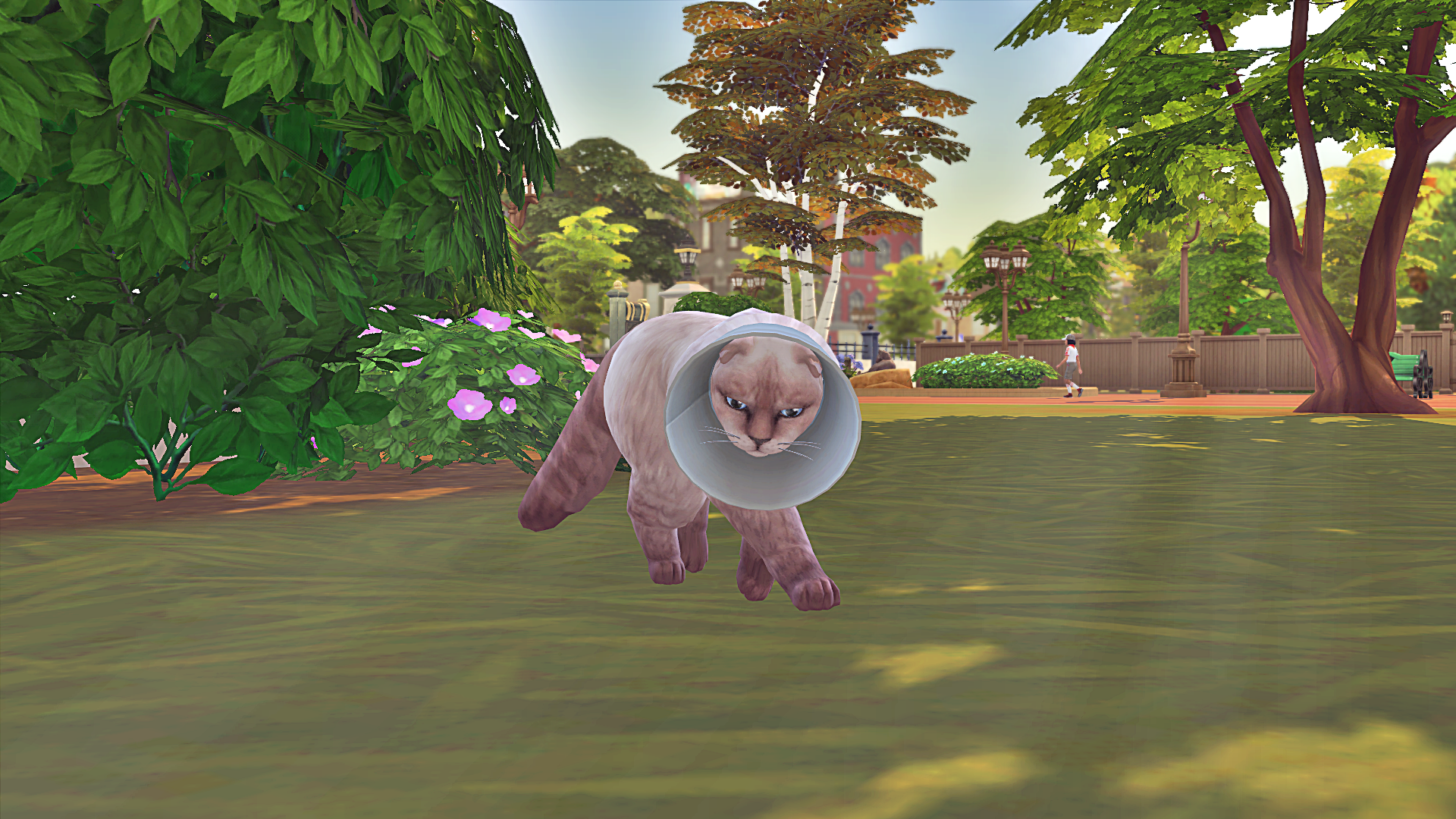 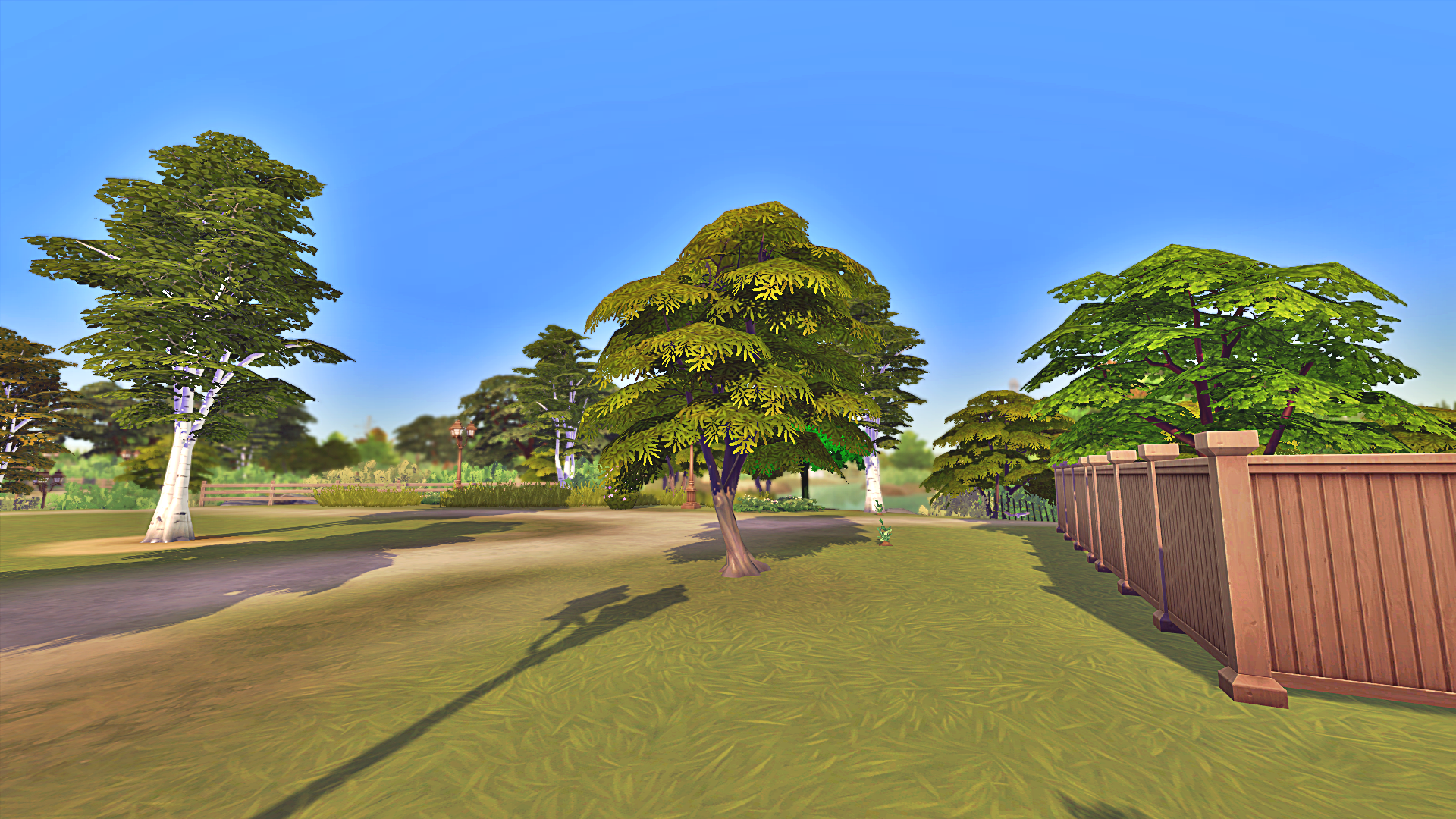 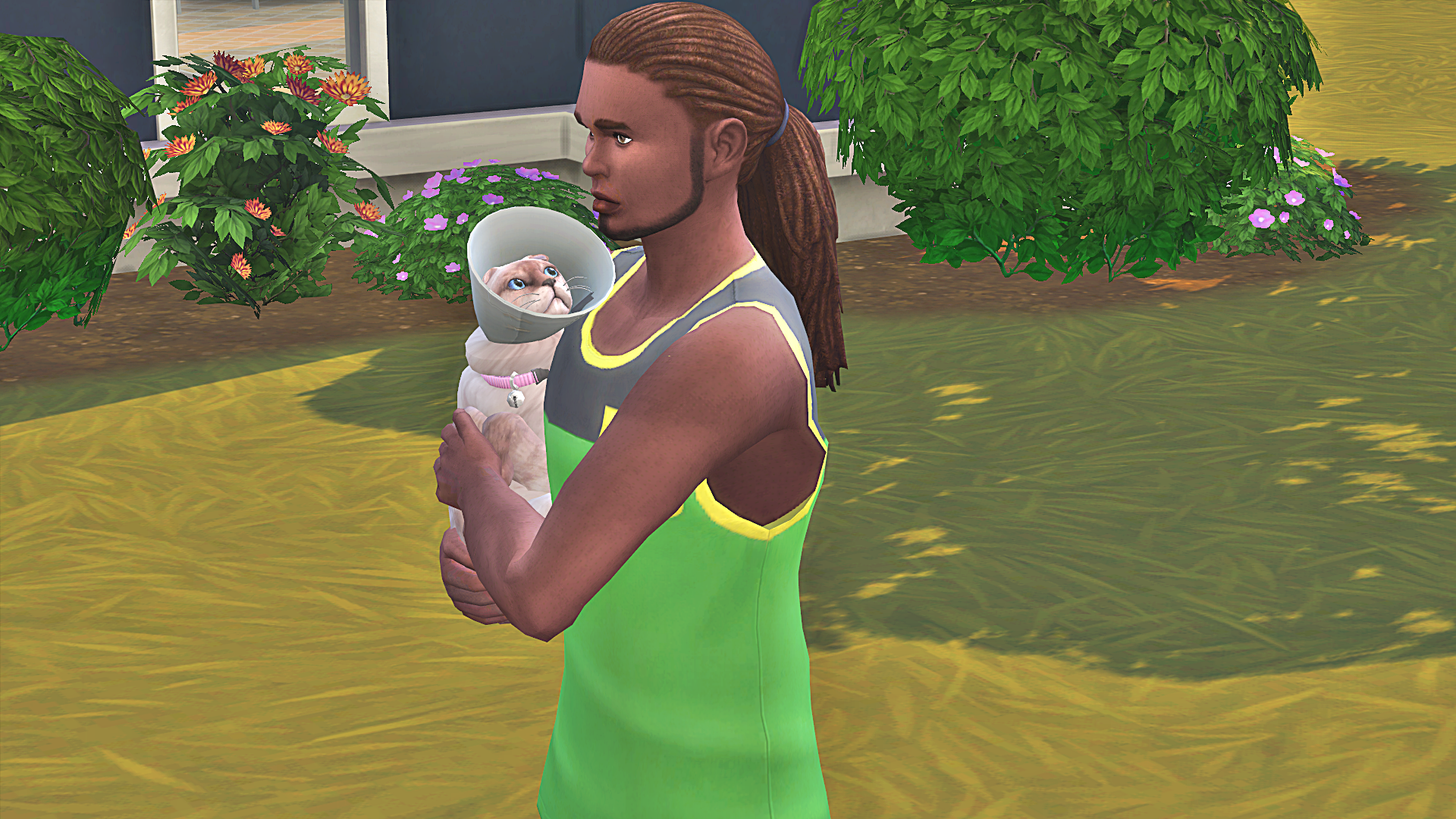 He took Miss Kitty back home so she could rest. In the hallway outside his apartment, Elijah saw another beautiful young woman he didn’t recognize. Her name was Summer Corona. She said she’d recently moved to Willow Creek and was just exploring the city to hangout with an old friend from high school who lived in his building. Elijah didn’t recall having any recent graduates of high school in his building, but maybe Miss Corona was older than she looked. 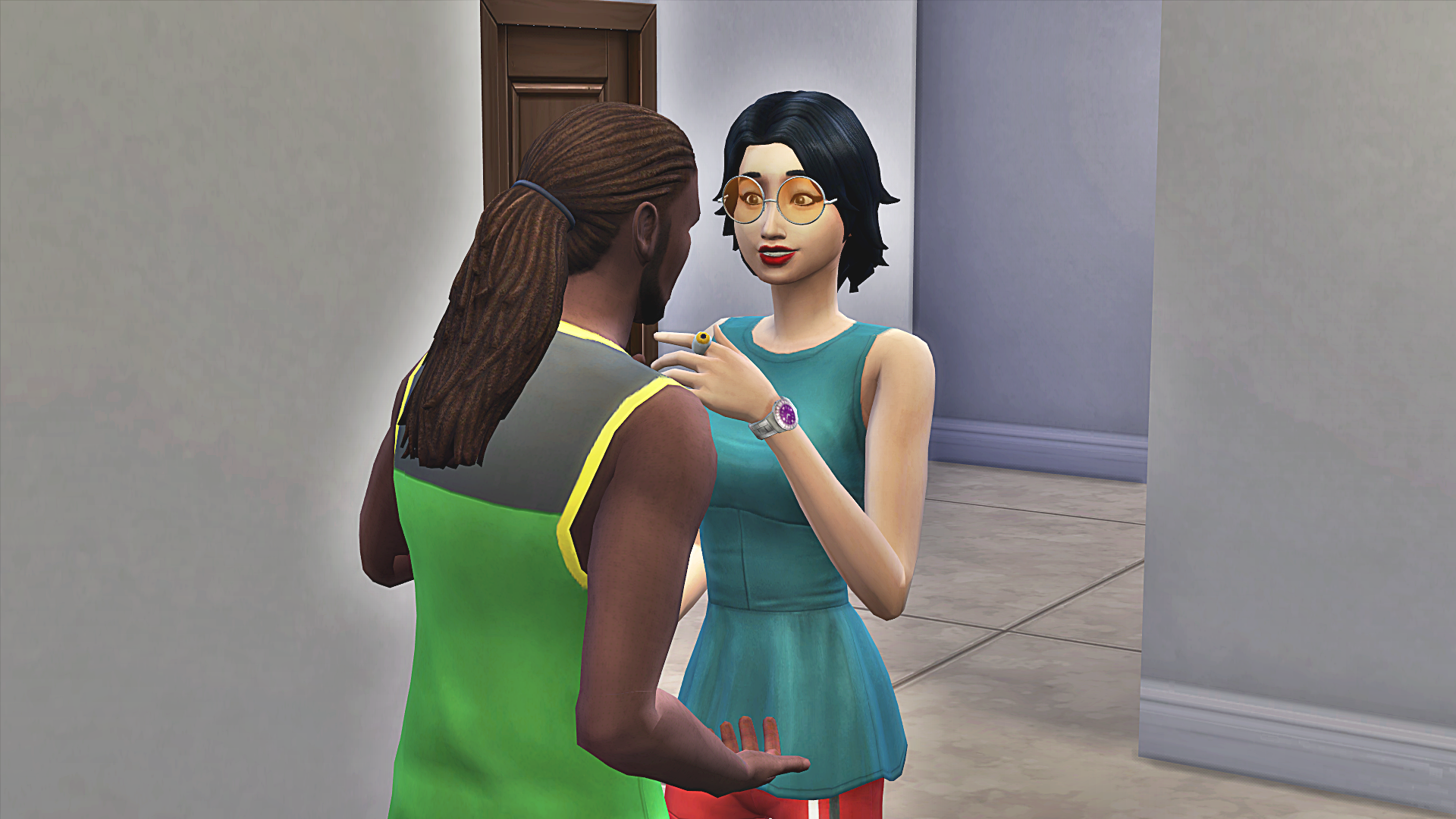 Elijah didn’t ask too many more questions because they seemed to be on the same page. What better way to soother his frayed nerves about Miss Kitty’s condition than to distract himself with the attentions of a new hot stranger. He was technically dating Alice Martin–but they weren’t technically exclusive–but Summer was so sweet, and so willing, so he moved forward. 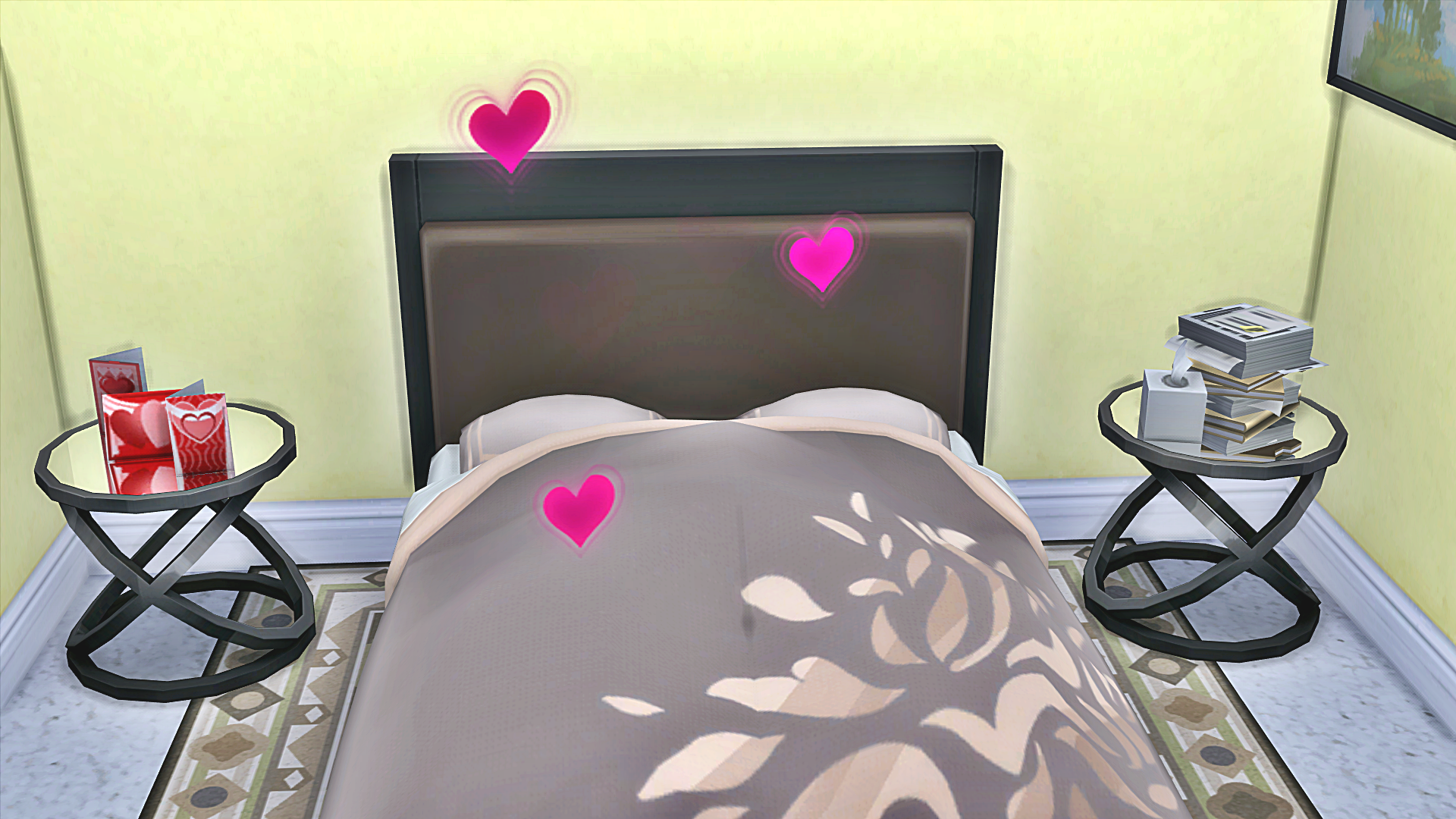 She ended up hanging out with his the rest of the day. Even though she was a Dog Lover, she didn’t mind Miss Kitty, and she loved Elijah’s charm. 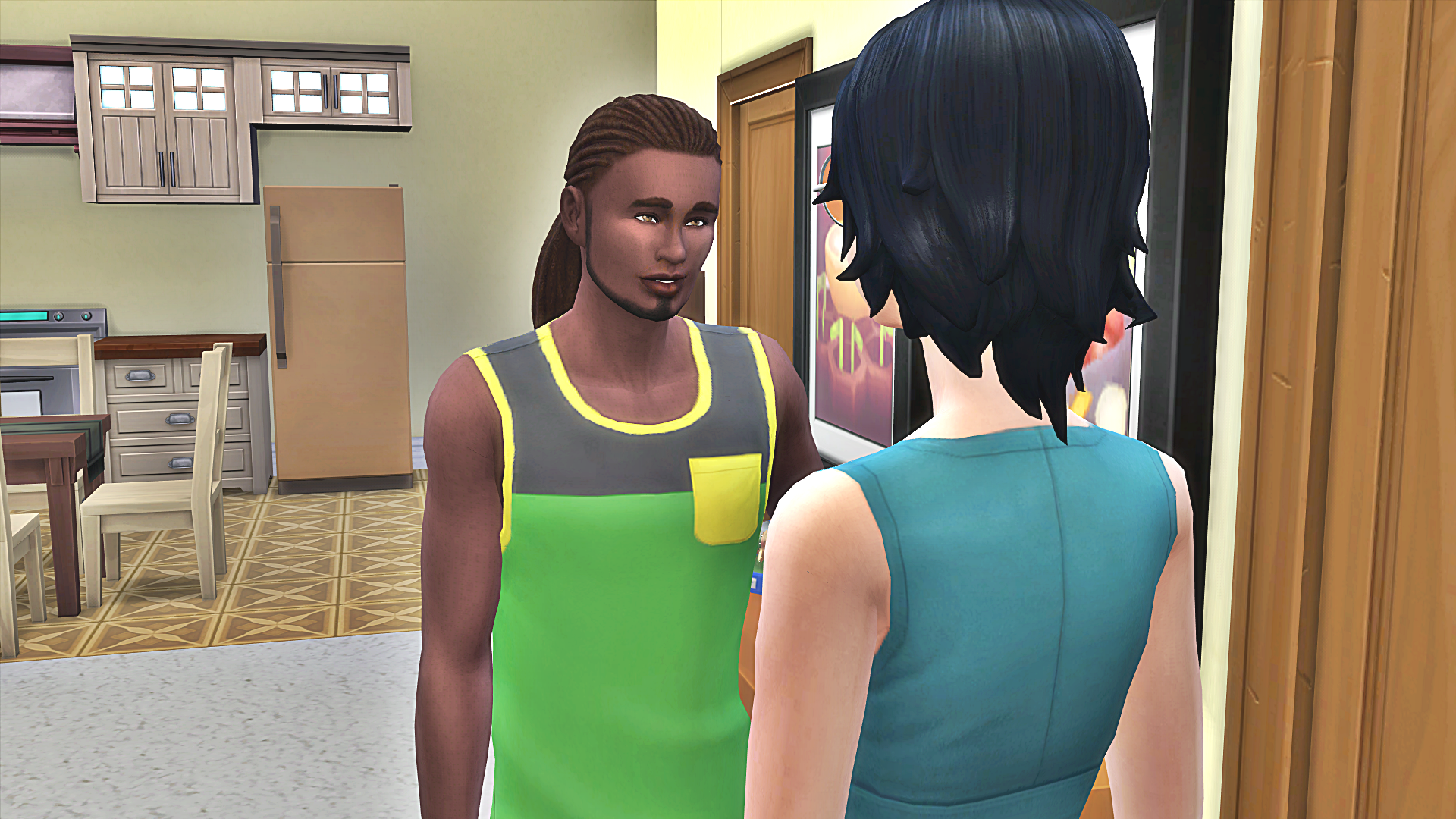 And she had what could only be described as stamina. Elijah knew he was going to be tired at work the next day, but it was worth it. And as always, Miss Kitty never judged. 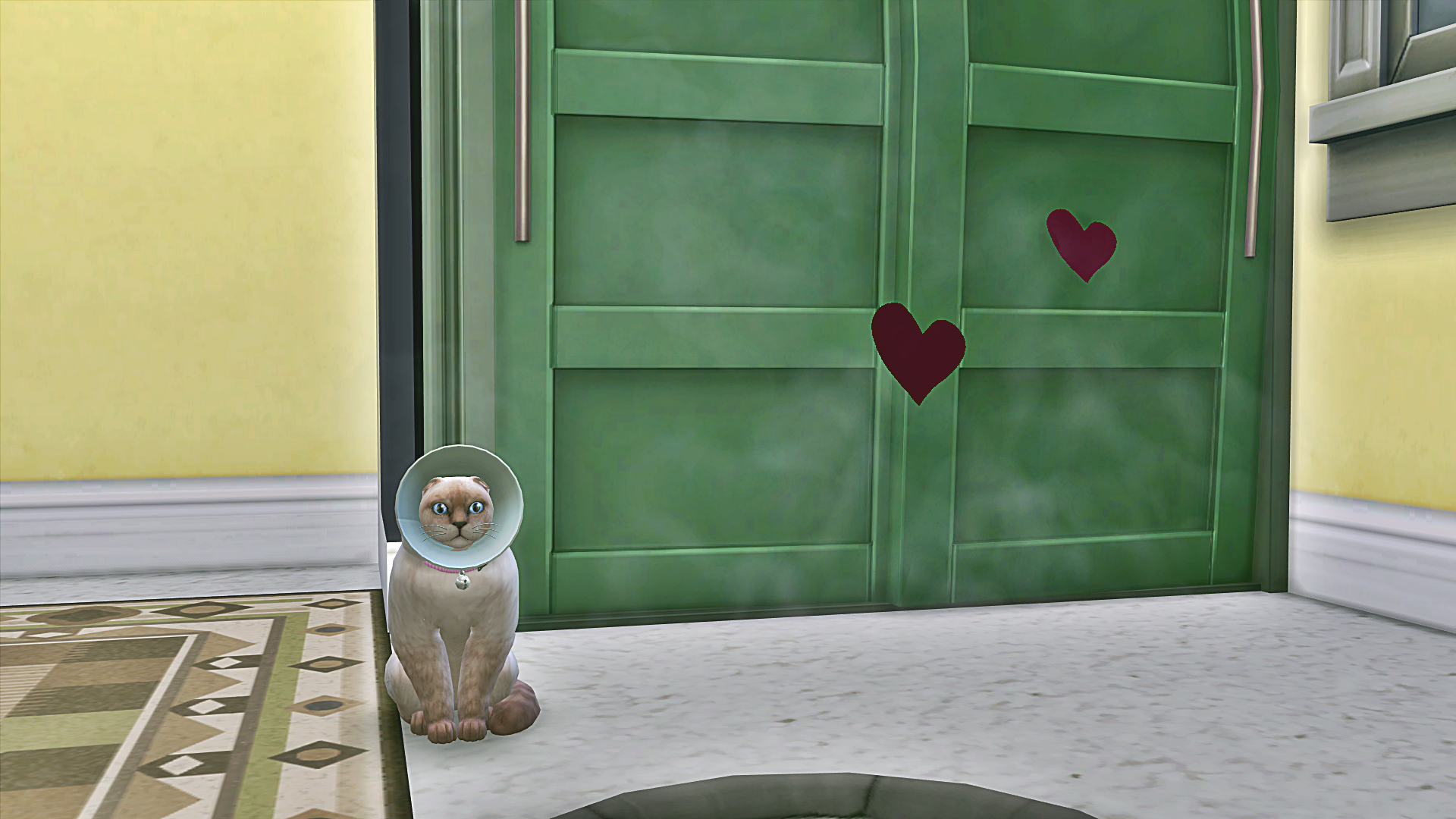 Elijah was chilling in the evening watching a cooking show on TV. Summer was playing video games on his laptop. They were chatting comfortably, and Elijah realized he was actually enjoying the company of a woman and not just waiting until he could get her into the sack again. He decided to try to get to know her even better.

“I’m having a great time with you today. I think we should get to know each other better.”

“Sure,” said Summer, smiling sweetly but not looking up from her game, “what do you want to know?”

“I never asked. When did you graduate high school? I can’t figure out who in my building you would have graduated with.”

“Oh no, silly, I haven’t graduated yet. I graduate this year,” said Summer, chuckling at him. 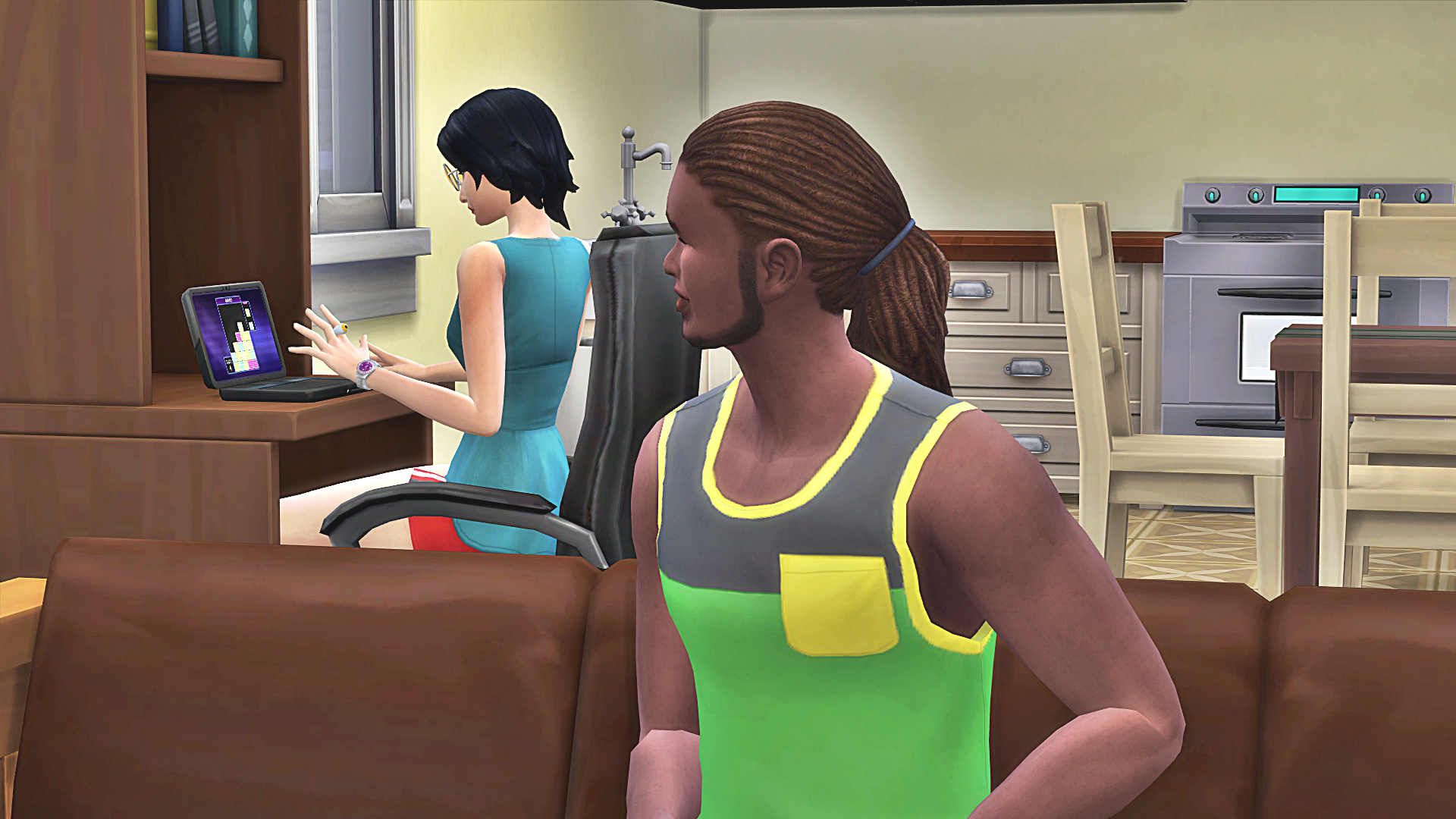 “Yeah, I’m like totally going to graduate at the top of my class if that bitch Sloane doesn’t do better than me on the AP Chemistry final.”

Elijah’s heart stopped. Did he just–? Was she really–? Oh no, oh no, oh no! Had he really spent all day with a teenager and not known it?? Technically (these damn technicalities!) it wasn’t the end of the world because she was the Sim age of consent, but still the optics were… icky at best.

After asking a few more questions, Elijah learned that Summer Corona was the recently adopted daughter of Eric Lewis and Alice Spencer-Kim. She felt like they’d maybe adopted her just to help with their daughters Olivia and new baby Noelle, but she was happy to be suddenly rich, and she loved being part of a family.

Summer noticed the time and decided to head home rather than breaking curfew (curfew?!?!). She kissed Elijah on the cheek and thanked him for a great time. She told him she dug his whole hot doctor thing, and that she’d give him a call after graduation to find out if he was still single.

Elijah was near mute at this point, and was trying to figure out if Summer was going to be a threat to his public image. He definitely needed to start being more discerning with his flings because next time, the woman (only grown women from now on!!) might not be so chill. 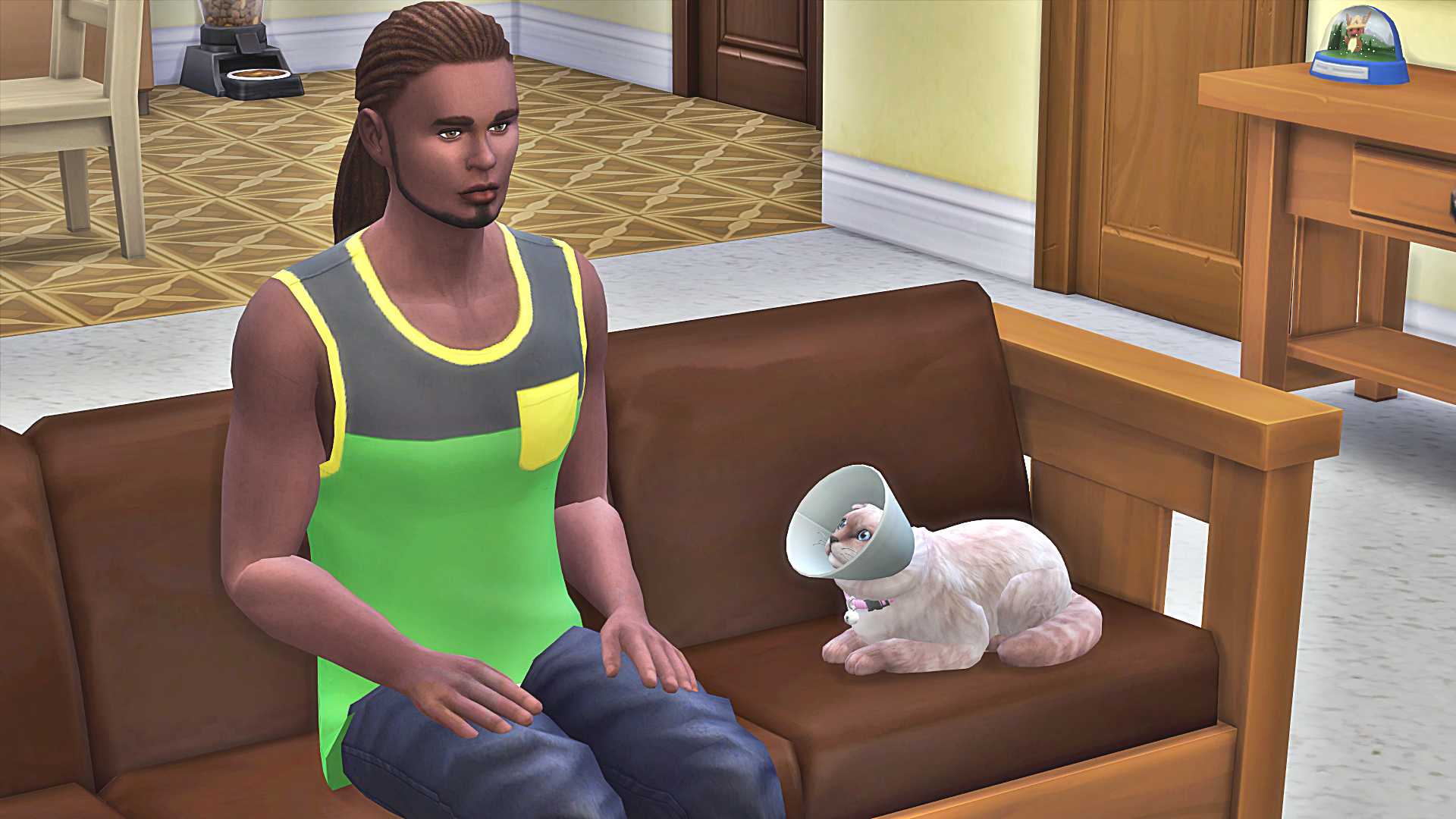 “You won’t tell anybody, will you Miss Kitty? No, you won’t tell; I know my secrets are always safe with you.” 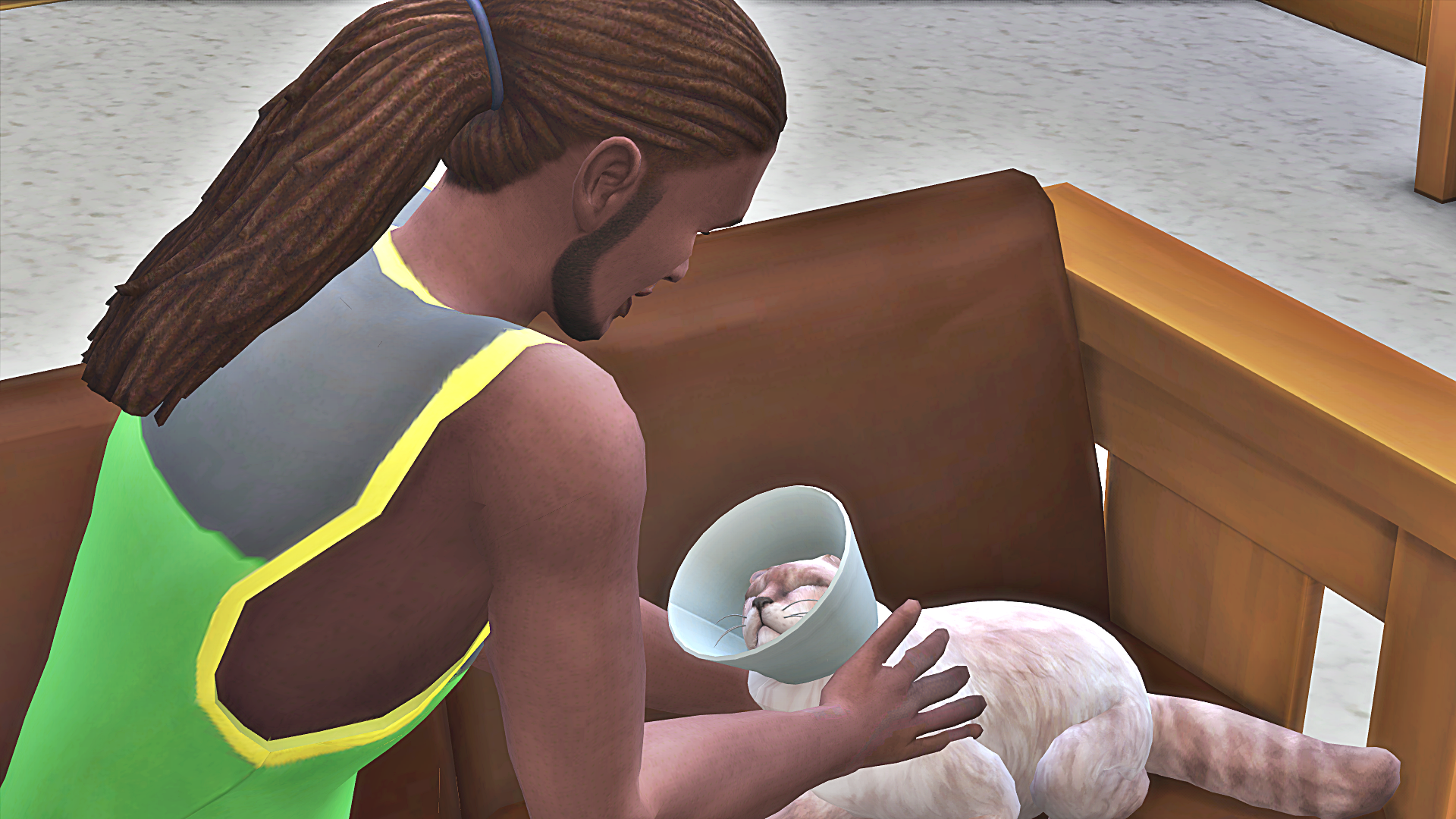