Bo came home from his date, and saw the kids off to school. Then he dropped Sky off at daycare before heading to work himself. They had questions about his time with their mother, but he didn’t have time to give them answers. Wondering about their parents put them in weird moods at school.

When they arrived home after picking up Sky from daycare, it was clear the day hadn’t gone well. Asa was very uncomfortable from a bully trying to give him a wedgie. He had plans to inform his crew, the Renegades, about what happened and plot his revenge. Gem was mortified about something that happened. Whatever it was upset her so much, she wouldn’t even discuss it. 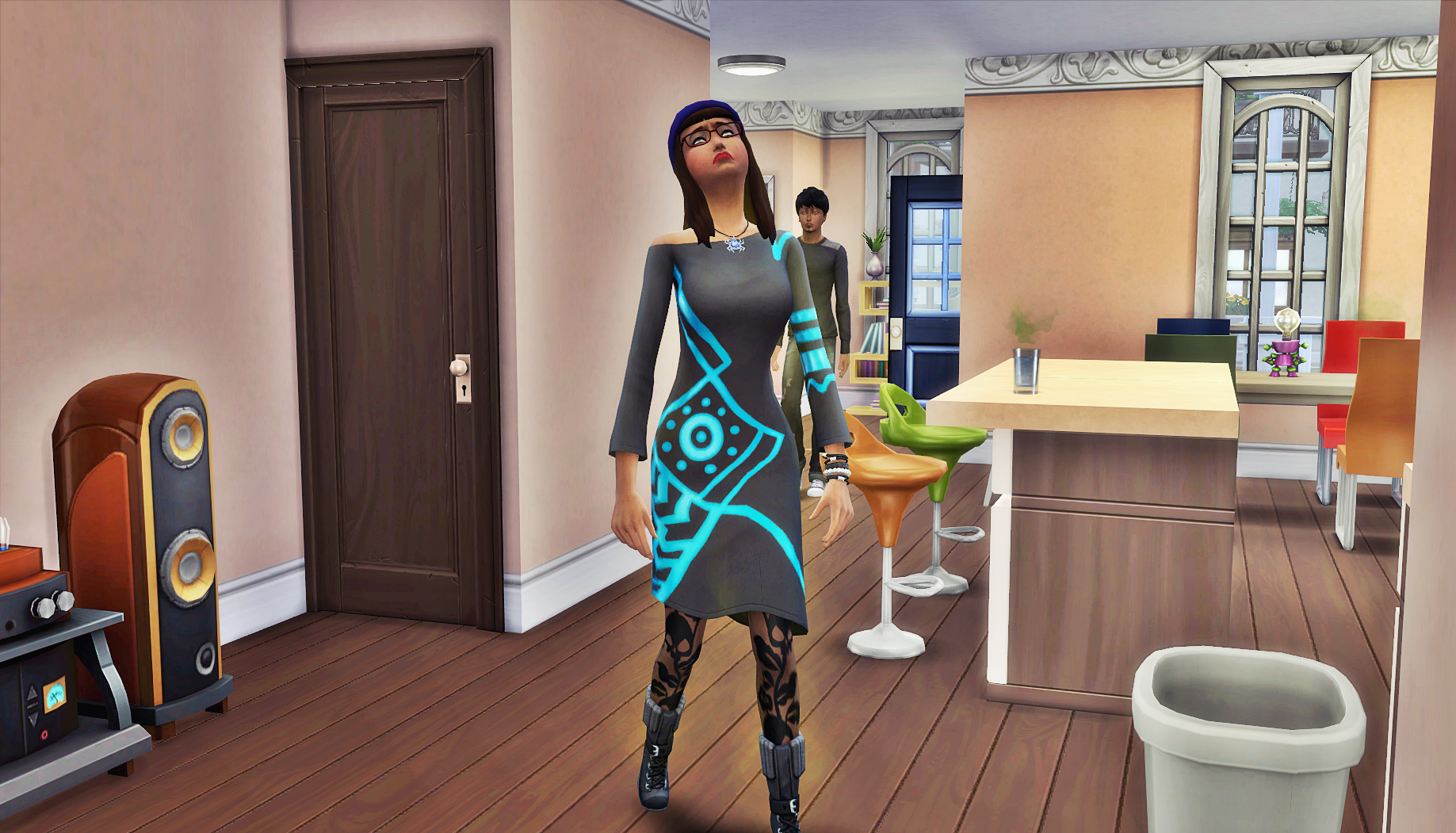 Not one to wallow, she headed straight to the bathroom to give herself a pep talk. 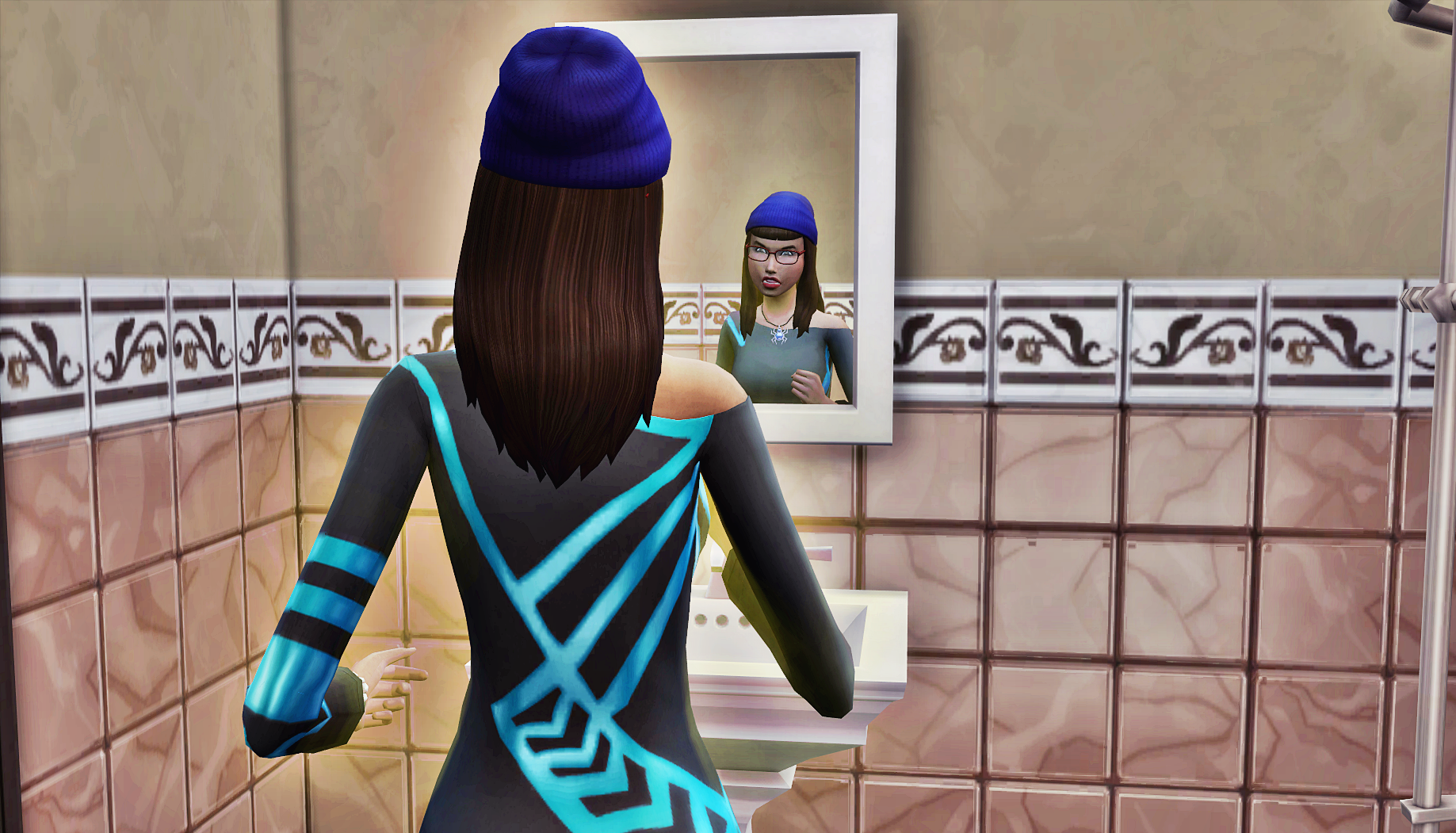 After calming down from her mortification, Gem went looking for Sky, The toddler wanted to play and Gem obliged. The messy house quickly made her very uncomfortable, but taking care of Sky came first.

“Asa, if you’re not going to do your homework, can you at least do the dishes?”

“Do I ask you to do the dishes at 4am before you go to work? No I don’t,” said Asa. “I’m trying to relax before I have to go endorse capitalism for another day. You can do it after you finish playing with the brat.”

“Whatever, it’s a term of endearment. Chill out.” 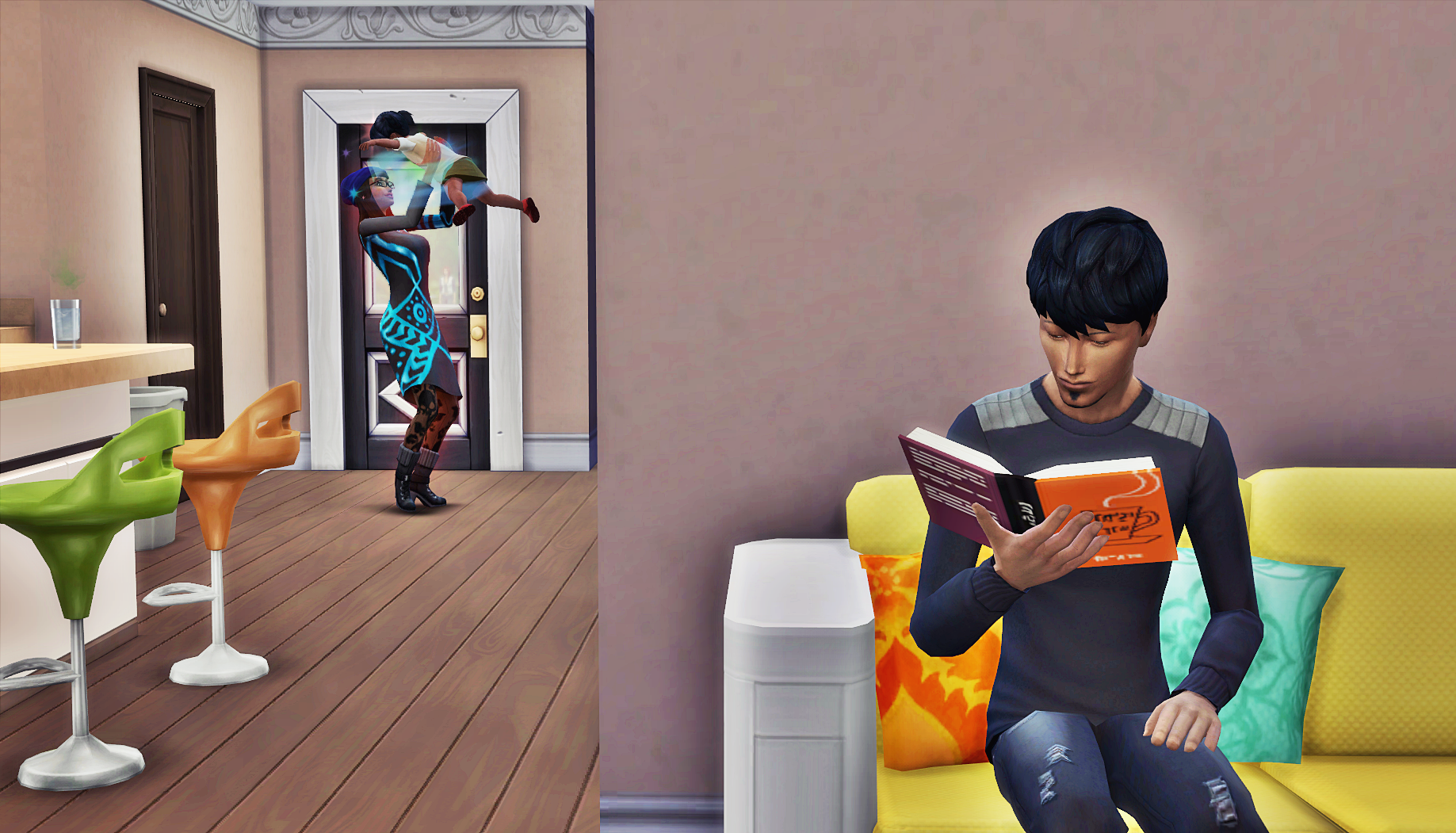 After play time was done, Gem grabbed Sky a snack. She refused to wash the dishes while Asa was still there, so by the time he left for work, there were still dishes everywhere. She went to grab some leftovers and tried talking to him again.

“What do you think happened when they went out last night? Our father did not come home before bedtime, so that has to be a good sign, right?”

“Who cares,” said Asa, “they’re not getting back together anyway. Don’t bother getting your hopes up. I’m over this. I’m going to work. Catch you later.” 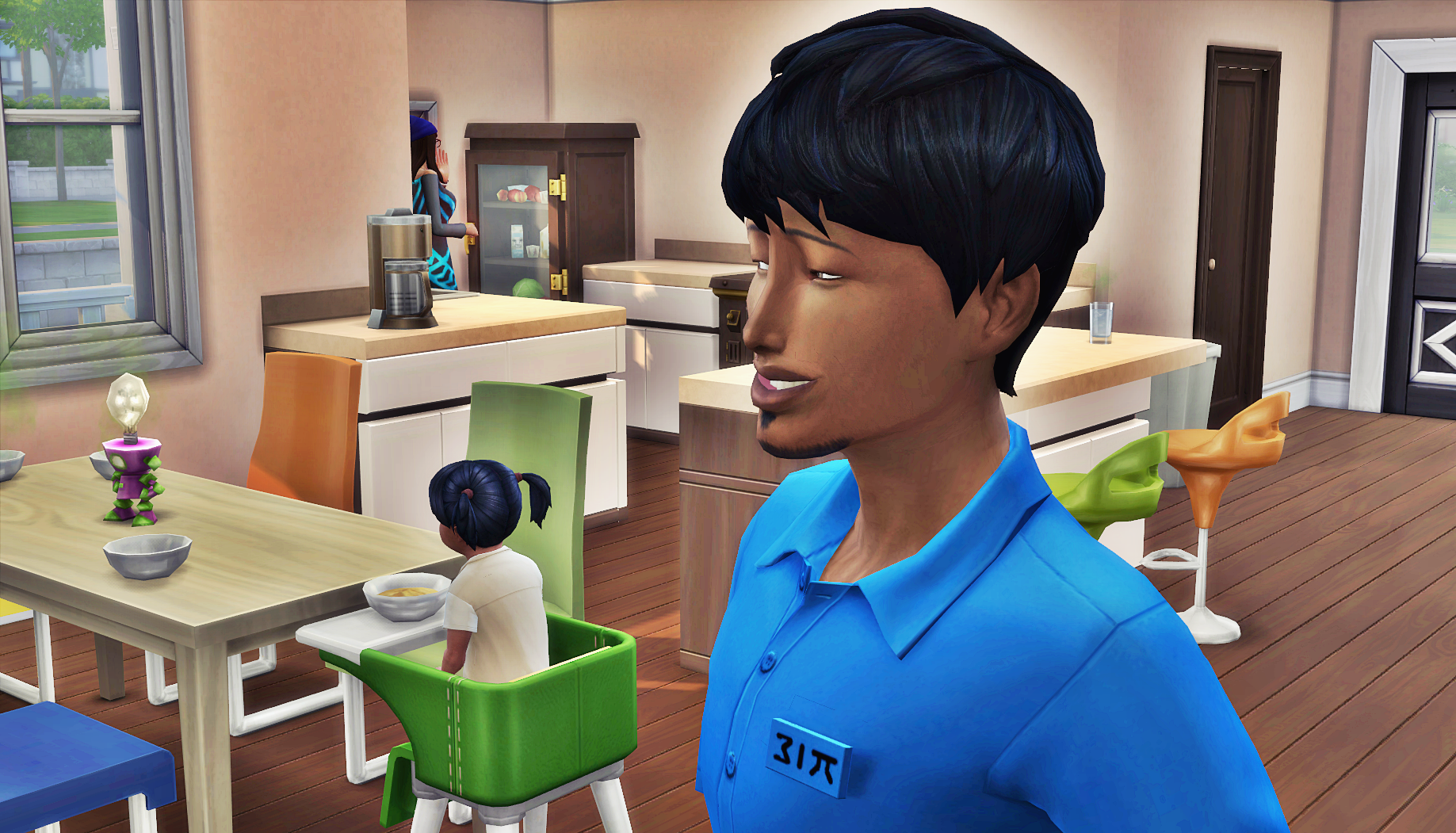 Gem hated arguing with Asa, but it seemed he only had kind words for his girlfriend Olivia and that mean club of his, the Renegades. She wished he wanted to be more a part of their family. And she wished he would have washed the darn dishes! 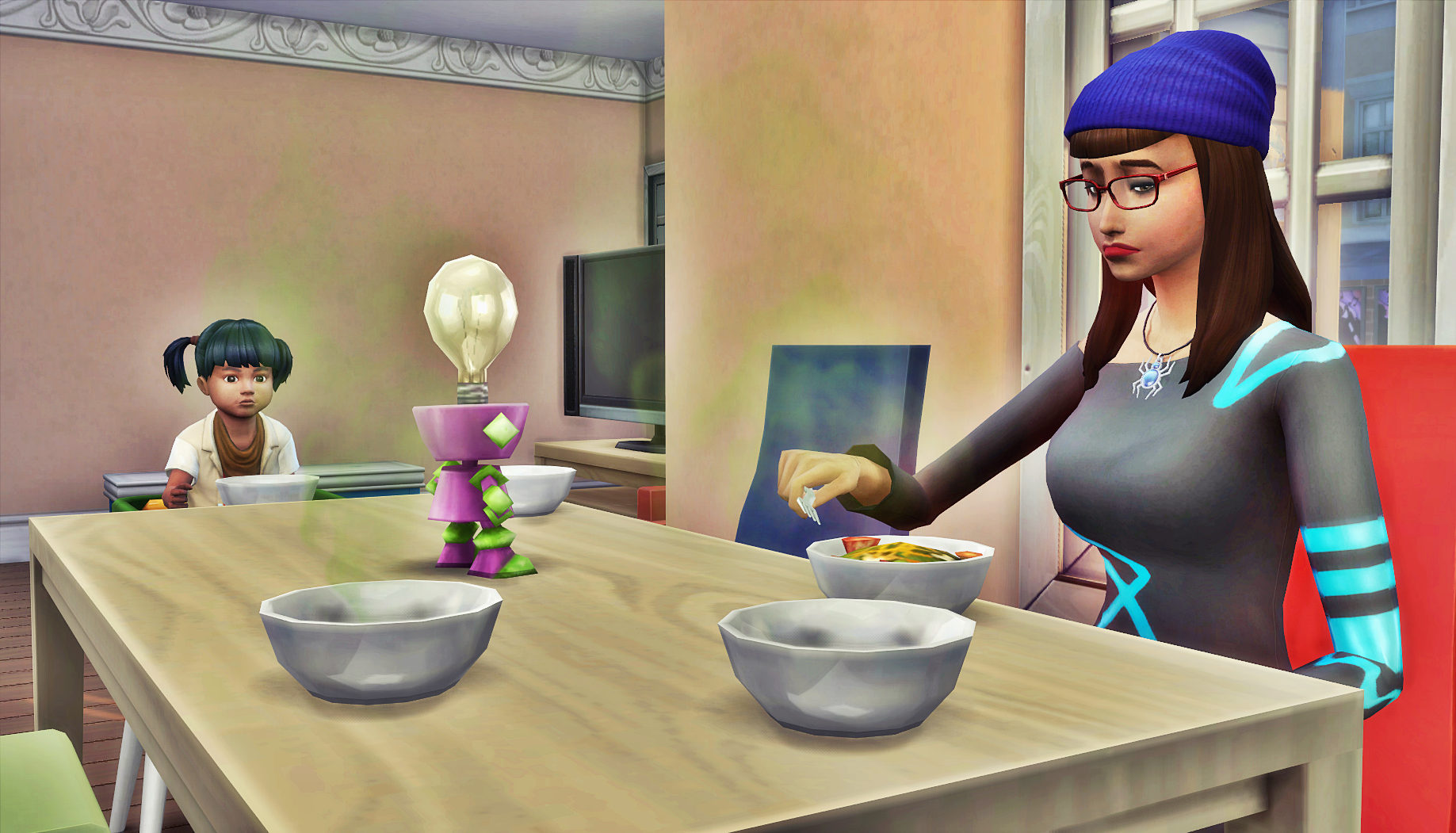 It wasn’t long before Bo arrived home from work, and he had good news. He got a promotion at work! They even gave him a coffee pot as a reward bonus. He was happy he didn’t spend the money on one during the renovation. 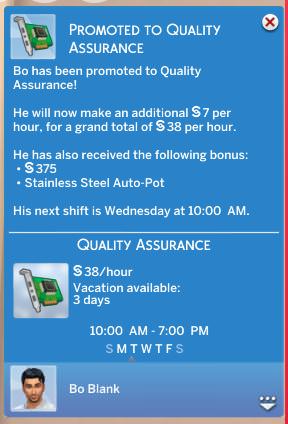 He checked on Sky, and of course she wanted to play. Now that her co-parent was home, Gem was able to clean up the house. She gathered all the dishes.

Some teenagers maybe have resented the role she’d been thrust into, but not Gem. She loved that her father trusted her enough with the responsibility to help raise his youngest daughter. And it’s not like anyone else was stepping up to help. Besides, Sky was a Sim, not Sixamian, so that basically made her a special needs child. She needed so much attention and help. her birthday was in a few days and she wasn’t even potty trained yet. No, Gem was proud to step up and help. It made her happy. 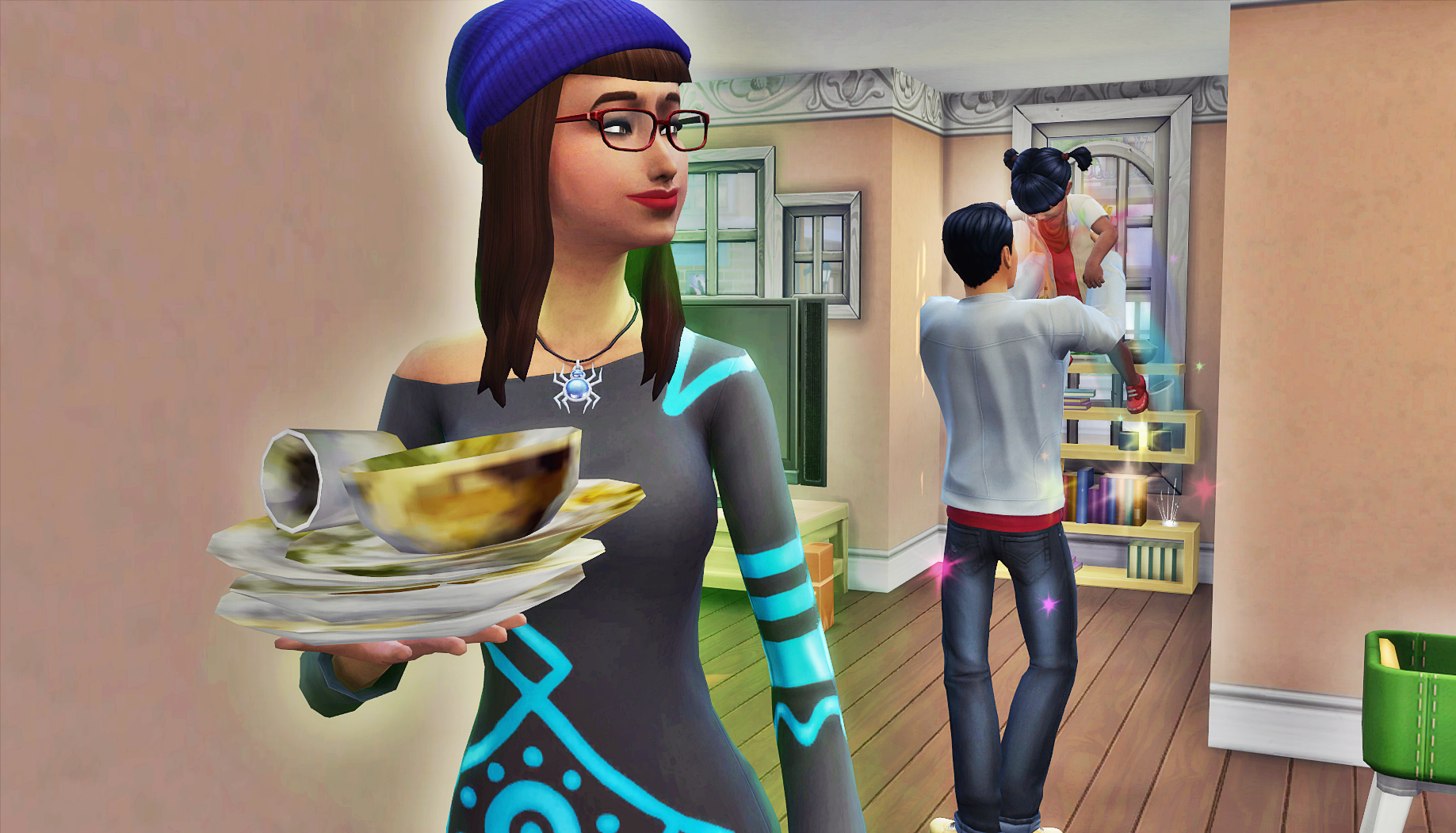